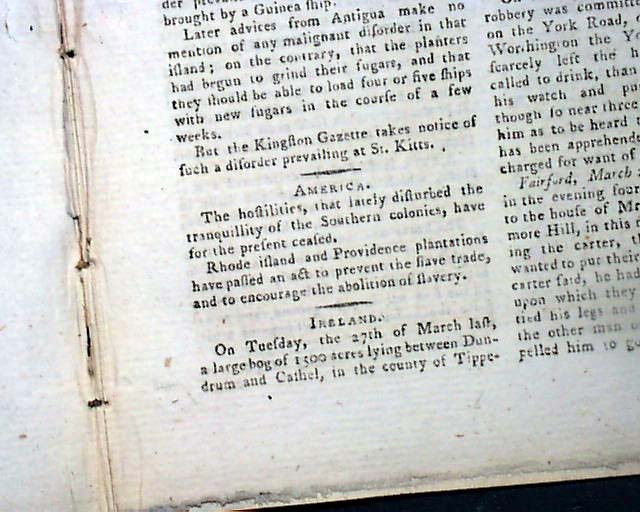 Within this issue is a report concerning Commodore Phillips at Botany Bay reading: "The Botany fleet arrived at the Cape on the 13th of October, after a passage from Rio de Janeiro of only five weeks & four days. Commodore Phillips, after supplying the ships with sea stores, means to purchase live stock of every kind the country affords & then to proceed in a direct course to the place of is destination, unless driven by stress of weather to alter it.".
This report coincides with the historical record which indicates Phillips stopped off at Brazil for various supplies before traveling on to Botany Bay to establish the first British settlement.
Another item of note under the heading "America" states in part, "Rhode Island and Providence plantations have passed an act to prevent slave trade, and to encourage the abolition of slavery."
Both plates called for are still present.
Complete in 96 pages, full title/contents page with an engraving of St. John's Gate, wide, untrimmed margin, 5 1/2 by 8 3/4 inches, very nice condition.