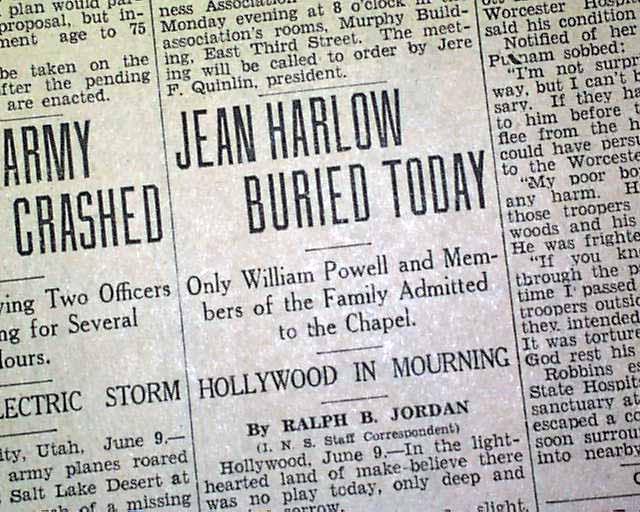 
THE BETHLEHEM GLOBE-TIMES, Bethlehem, Pennsylvania, June 9, 1937  The front page carries a one column headline "Jean Harlow Buried Today" with subhead "Only William Powell and Members of the Family Admitted to the Chapel" "Hollywood in Mourning". This continues to page 8 where another article "Jean Harlow's Childhood Life was a Happy Affair; Guarded by Her Mother" with subheads "Fond of Pets She Was Showered With Dogs of All Descriptions - Pony From Grandfather - Never Cared for Clothing as a Child and Was Dressed Very Simply". This also includes several photos.
Also on the front page is "Hitler Plans Surprise Speech In Another Bid To Extend Frontiers" with subheads "'Surprise Saturday' Talk for Benefit of East Prussian Patriots" "Date is Set for June 19" "Nazis Now Dominate the New Government of the Little Danzig" "Sees a Future" "Address to be Made in Castle Just Across the Border". This includes a photo of Adolf Hitler.
Other news, sports, and advertisements of the day are within.
This is complete in 26 pages with several small binding holes along the left spine, otherwise is in very good condition.