Home > Back to Search Results > Battle of Bull Run, in a Confederate newspaper...
Click image to enlarge 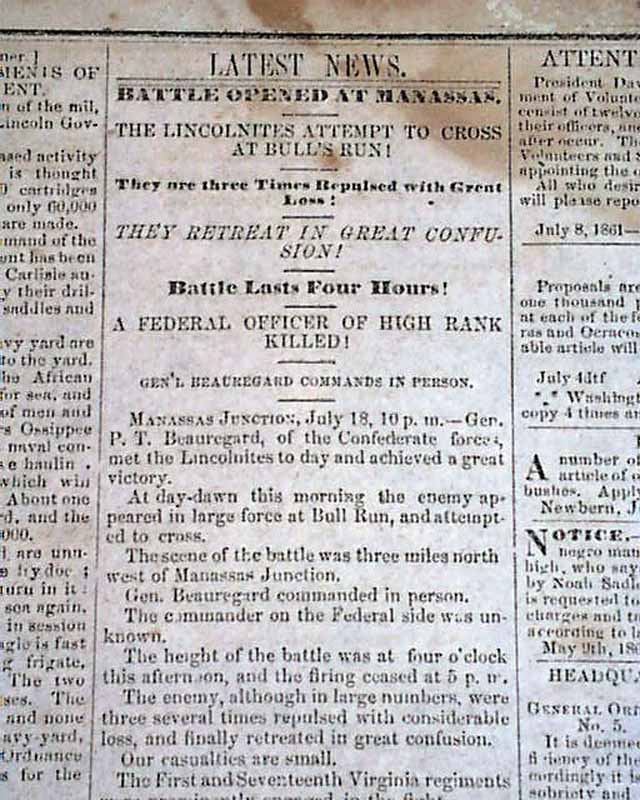 Certainly one of the less common titles from the Confederacy, as rarely have I seen it offered. This coastal town didn't remain Confederate for very long as it fell to General Burnside on March 14, 1862 with the Battle of New Bern. So truly "Confederate" issues can be difficult to come by.
Among the front page items are: "Two Men Killed" "The Dover Meeting" & other reports, however certainly the most notable content is the reporting on the first major battle of the Civil War: "Battle Opened at Manassas" "The Lincolnites Attempt to Cross at Bull's Run!" "They are Three Times Repulsed with Great Loss!" "They Retreat In Great Confusion!" "Battle Lasts Four Hours! and more.
The back page is entirely taken up with ads & notices.
Complete as a single sheet newspaper with a one column masthead, which was common among Confederate newspapers as every effort was made to conserve printing space since most paper mills were in the North. Damp stain to the upper right corner, nice condition.