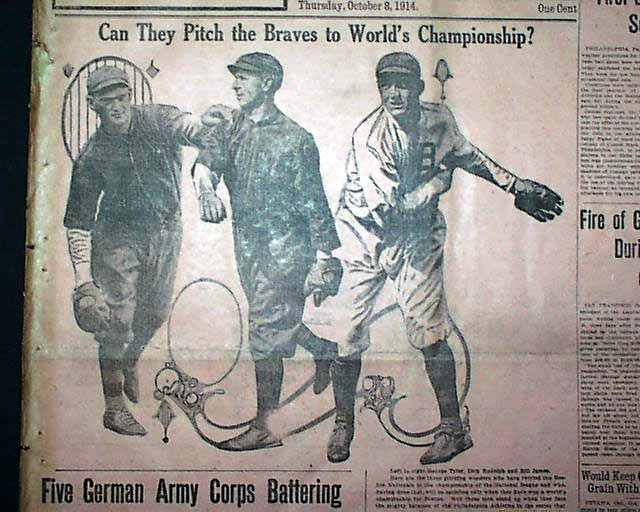 This is a five-issue set (the 11th was a Sunday and no issue was printed) pertaining to the 1914 World Series between the Boston Braves and Philadelphia Athletics which was the first four-game sweep in World Series history, excluding any tie games. Each issue has a pink-colored front page which carries the coverage of the series. There are several highly displayable pages!

October 8th - "Rain May Prevent First World's Series Game", "Can They Pitch the Braves to World's Championship?" with large photos of George Tyler, Dick Rudolph and Bill James. Also inside of this issue is "Connie Mack's Famous Athletics, Champions of World Now and Ready for Another" which is photos of all the players.

October 10th - "Whitewash Portion Served the Athletics", "Braves Blank the Athletics in the Second Battle for World's Base Ball Trophy". More coverage and photos inside the issue.

October 13th - "Stallings' Wonders Land All the Honors", "Braves Make New Record by Winning World's Flag in Four Straight Contest". This includes a large photo of Johnny Evers.
All issues contain the box scores of the games.
Other news of the day, including World War I coverage, and advertisements of the day.
The issues are complete, have a slight irregular left spine, some small edge tears, otherwise are in good condition. Should be handled with care.