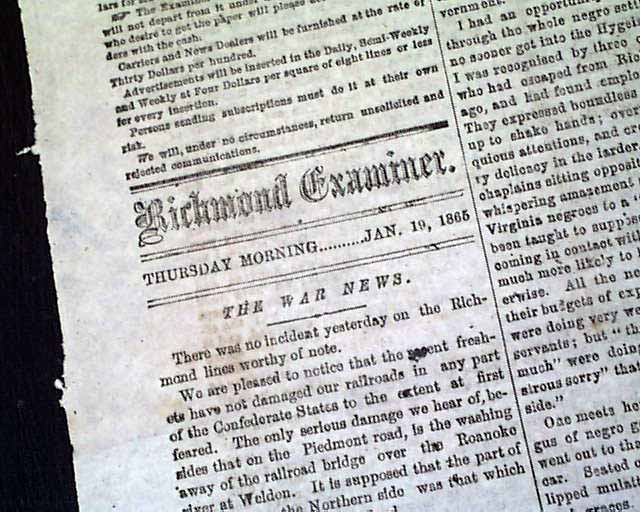 Not only a newspaper from the Confederacy, but from its capital as well.
The ftpg. has: "The War News" with various  reports on the Civil War, with subheads: "The Fall of Fort Fisher" "Movements in South Carolina" and "Rumoured  Changes in the Army & Cabinet". Also on the ftpg. is a letter from Fortress Monroe which begins: "One has an extraordinary opportunity here of testing the results of the Yankee dogma of negro emancipation & equality..." with much more.
The back page has a lengthy editorial which begins: "One may not unreasonably begin to hope that the country will hear no more about Confederate movements or overtures, or commissioners, or negotiations, tending to Peace. For the next two months, at least, there is to be war & not peace...". Also on the bkpg: "From Sherman's Army--His Movements on Charleston--Two  monitors Sunk in Charleston Harbor". There is also much reporting from the: "Confederate States Congress" and also reports from: "The Virginia Legislature".
Complete as a single sheet newspaper with a one column masthead (typical late in the war), in uncommonly nice, clean condition.