Home > Back to Search Results > Pickett's charge at the Battle of Gettysburg...
Click image to enlarge 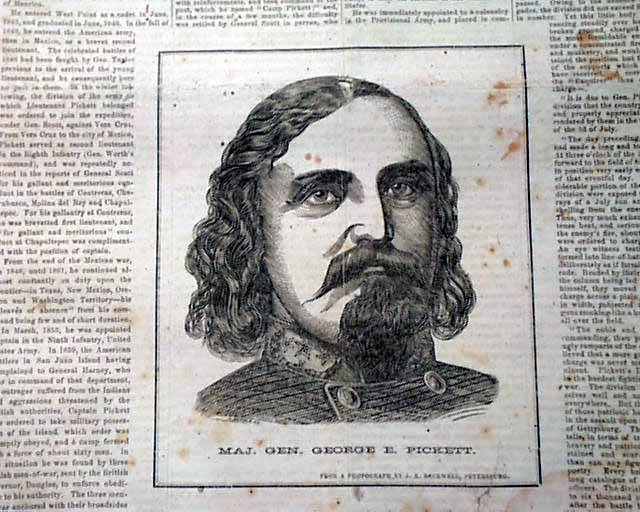 Pickett's charge at the Battle of Gettysburg...

The front page features a nice print of: "Maj. Gen. George E. Pickett" with the balance of the front page taken up with a lengthy & detailed biography of him (see for portions). Included in this biography is his involvement at the Battle of Gettysburg: "...At the late battle of Gettysburg, Pickett's Division displayed courage, fortitude and discipline to a degree that has never been surpassed. Owing to the absence of two brigades, the division did not exceed five thousand in number. yet this little body of men advancing steadily over half a mile of broken ground, charged and carried the most formidable entrenchments, under a concentrated fire of artillery and musketry, and would have maintained the position but for the failure of the supports which they should have received..." and what follows is a more detailed analysis of what has become known as "Pickett's Charge". Its futility was predicted by the charge's commander, Lt. Gen. James Longstreet, and it was arguably an avoidable mistake from which the Southern war effort never fully recovered psychologically.
Within the issue is an editorial headed: "The Times" reporting on the latest news from the battlefields, including in part: "...General Johnston had retired from Jackson & was falling back towards Alabama...General Lee is in the neighborhood, it is supposed, of Winchester. The Yankees already begin to find fault with Meade for not taking Lee and his army. He will go the way of Scott, McClellan, Burnside and Hooker, we suspect. He is said to have already crossed the Potomac. Wherever he may be, General Lee's eye is upon him..." with more (see).
The back page has a rather large cartoon.
Begun on September 13, 1862 the "Southern Illustrated News" sought to fill the void left when the Southern States lost access to Harper’s Weekly and other illustrated newspapers from the North. In its “Salutatory,” in the first issue the editors state:  "...We propose to issue an Illustrated Family Newspaper…devoted to literature, to public instruction and amusement, to general news, and to the cause of our country in this trying hour when she is engaged in a terrible, but resolute and hopeful struggle for her liberty and independence..." Although it could be argued it never lived up to all of these goals as reports from the war were very limited, it was an important publication nonetheless. At its peak boasting as many subscribers as the largest daily paper in Richmond. As with all Southern publications it suffered from lack of supplies, reporters, artists and engravers as many had been drafted either into the military or into the service of the Confederate administration to engrave paper money and stamps. The engravings were crude when compared to Yankee publications.
Eight pages, scattered foxing, wear at the margins, a page 2 repair to a tear, a small wear hole at the center of the front leaf is at the top of Pickett's head (see), a bit irregular at the spine.