Home > Back to Search Results > Johann Reis - inventor of the first "make-and-break telephone"... Very early report on the "telephone"...
Click image to enlarge 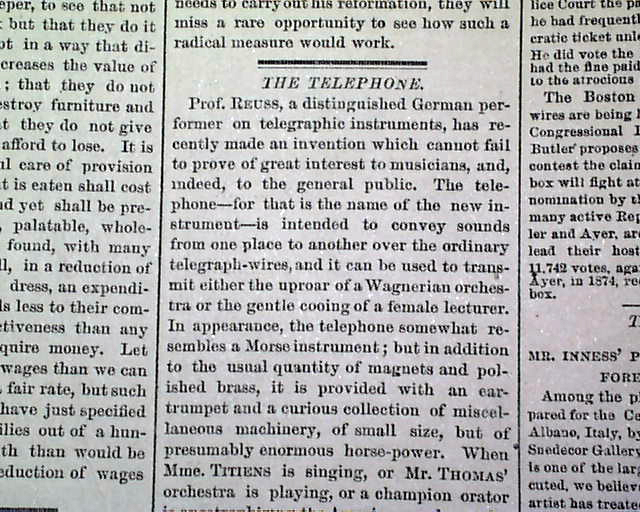 Very early report on the "telephone"...

Page 4 has a very early article on: "The Telephone" which takes most of a column. Although this article talks about the work of a "Professor Reuss", the inventor it apparently was actually referring to was named Philipp Reis. The Reis telephone actually turned out to be too crude for commercial use -- it could transmit musical tones fairly well, but not speech. Ironically, the Philadelphia Centennial Exposition mentioned in this review would be where Alexander Graham Bell famously presented his improved version of the telephone, which could transmit speech more clearly. The article begins: "Prof. Reuss, a distinguished German performer on telegraphic instruments, has recently made an invention which cannot fail to prove of great interest to musicians, and, indeed, to the general public. The telephone--for that is the name of the new instrument--is intended to convey sounds from one place to another over the ordinary telegraph-wires, and it can be used to transmit either the uproar of a Wagnerian orchestra or the gentle cooing of a female lecturer. In appearance, the telephone somewhat resembles a Morse instrument; but in addition to the usual quantity of magnets and polished brass, it is provided with an ear-trumpet and a curious collection of miscellaneous machinery of small size..." (see).
Eight pages, lightly toned, various small edge tears, partially loose at the spine, mildly fragile but in good condition.