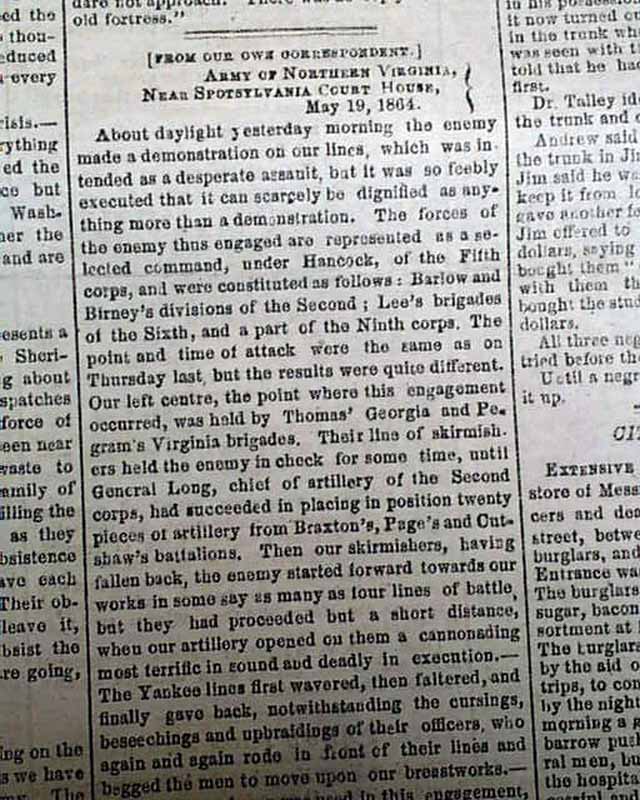 A very famous newspaper from the capital of the Confederacy. Among the front page items are: "The War News" with subheads: "From the Peninsula", "From the Southside", "The Night Assault--Bloody Repulse of the Yankees". Also a report from: "Army of Northern Virginia, Near Spotsylvania Court House" which includes a letter signed in type: George E. Meade. This detailed reporting is concerning the Battle of Spotsylvania. Also on the front page; "News from General Lee's Army" which has 2 dispatches from Spotsylvania, and: "From North Georgia", "The Organization of the Reserve Forces" as well as other items.
The back page has an interesting editorial which begins: "Lieut. General Grant and Major General Meade, who congratulated their army on the morning after the awful slaughter suffered at Spotsylvania Court House, that they had driven General Lee from his last entrenchments..." with much more concerning this significant battle.
The back page also has much from: "The Confederate Congress" and also has: "Latest News From the North" and nearly a full column of; "List of Casualties" from the battle near Drewry's Bluff on May 14 & 16.
Complete as a single sheet newspaper with a full banner masthead. Never bound nor trimmed and in great condition.