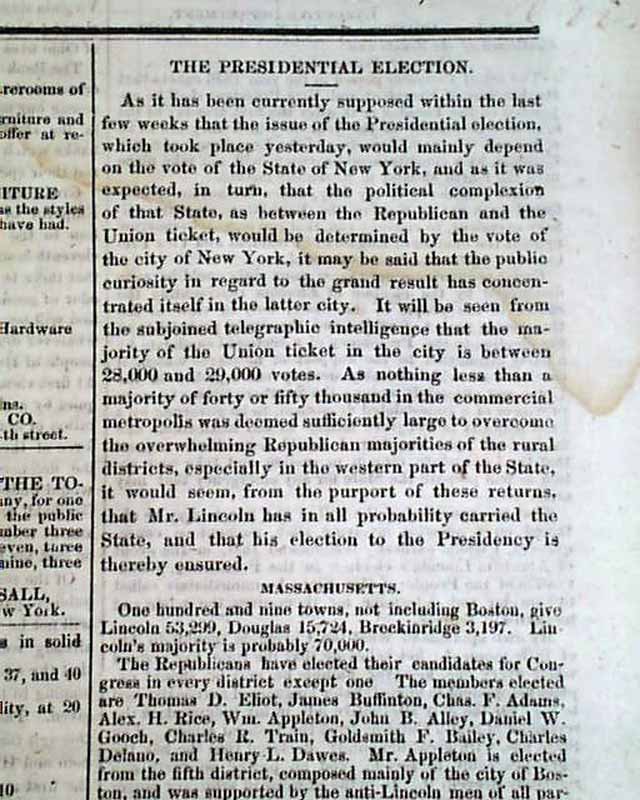 
NATIONAL INTELLIGENCER, Washington, D.C., November 8, 1860  This is the tri-weekly edition of this famous newspaper which is perhaps the best newspaper to have with news on any Presidential election, being from the nation's capital.
The front page has a report: "The Presidential Election" which begins: "As it has been currently supposed within the last few weeks that the issue of the Presidential election, which took place yesterday, would mainly depend on the vote of the state of New York..." and ending with: "...it would seem, from the purport of these returns, that Mr. Lincoln has in all probability carried the state & that his election to the Presidency is thereby ensured."
This report is followed by partial election reports from Mass., Vermont, Rhode Island, Connecticut, New York, and 12 other states, some showing the success of Lincoln, others--mostly Southern states--showing favor for Breckinridge.
Page 3 has a report headed: "The Presidential Election" which begins: "From the telegraphic reports of the Presidential election received since our last publication...It would seem probable that Mr. Lincoln has carried all of the non-slaveholding States on the Atlantic slope, with the exception of New Jersey..." with more (see). This report is followed by partial election reports from Mass., New York, New Jersey, Delaware, Maryland, "Virginia, North Carolina, and Georgia.
Another report on pg. 3 headed: "Lincoln's Election in the South" has a Charleston dateline & includes: "...that the news of Lincoln's election was received with long continued cheers for a Southern Confederacy...will soon send a commissioner to the Georgia legislature to confer about prompt action."
Complete in four pages, large folio size, in nice condition.