Home > Back to Search Results > The Queen returns for Oxford, now that the Great Plague has eased...
Click image to enlarge 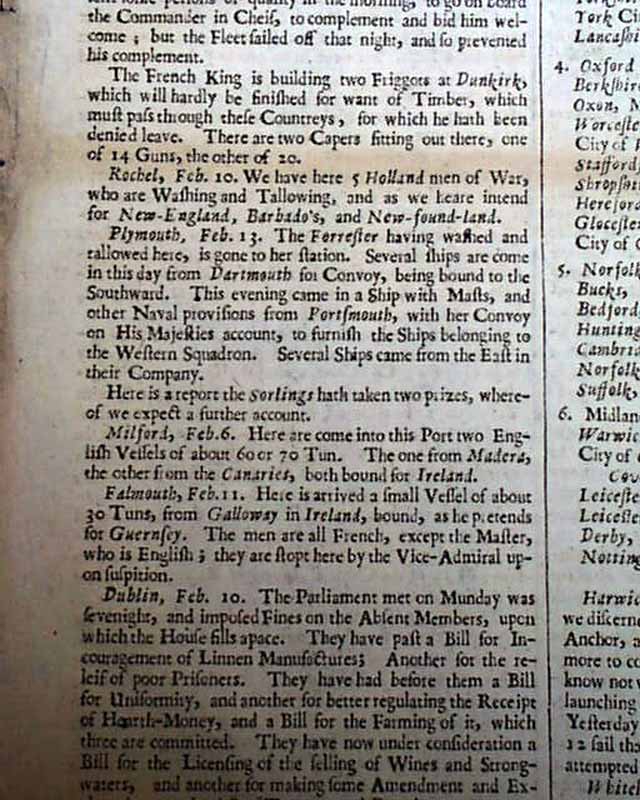 The back page actually has reference to the Great Plague & the return of the Royal Court to London, with: "This afternoon Her Majesty arrived here in two dayes from Oxford, in a perfect health, to the great content and joy of this Court, having been met by His Majesty..." (see). There is also mention of the New World with a back age naval reference: "...have here 5 Holland men of War...and as we heare intend for New England, Bardado's, and New-found-land." (see images).
A very early issue of the world's oldest continually published English language newspaper, having begun in 1665, and is still publishing today. This date is actually from 1666 as at the time they used the Julian calendar, the year changing in late March. But this is a very early issue of this title being just the 5th issue published on this title.
A single sheet issue, 7 by 11 1/4 inches, foxing at the ftpg. horizontal fold & a bit at the upper right margin, two tiny worm holes near the bottom are in blank margin only. Generally quite nice condition.