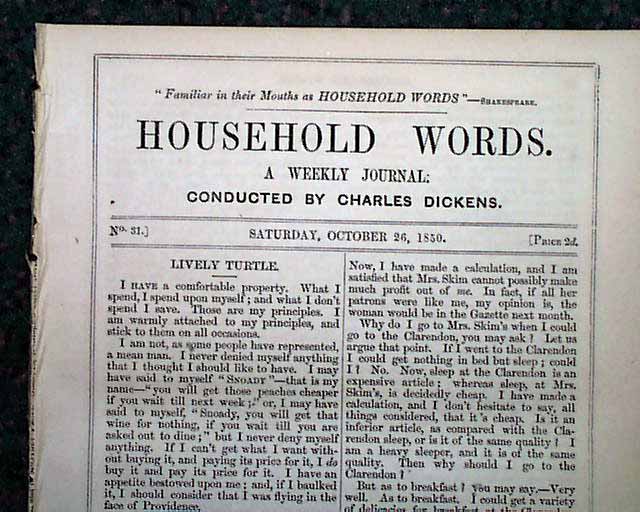 * Charles Dickens original writing within his own publication

Starting on the front page is "Lively Turtle", an original writing by Charles Dickens. While Household Words was a Dickens' publication, most of the literary contributions were made by others. Although he did make ongoing contributions, nearly all are unattributed.
Additional short stories, poetry, and other literary pieces are found throughout - and some may have been written by Dickens himself, but we have not researched each entry to determine its author.
This 24 page issue is in nice condition and measures 6 x 9 inches.

wikipedia notes: "On 21st January 1846 Charles Dickens published the first edition of his new radical newspaper, The Daily News. The newspaper was not a great commercial success and Dickens resigned as editor. However, he was determined to create a means where he could communicate his ideas on social reform and in 1850 he began editing Household Words. The weekly journal included articles on politics, science and history. To increase the number of people willing to buy Household Words, it also contained short stories and humourous pieces. Dickens also used the journal to serialize novels that were concerned with social issues such as his own Hard Times (1854) and two books by Elizabeth Gaskell , Cranford and North and South. By 1851 the twenty-four page Household Words was soon selling 40,000 copies a week. Dickens published Household Words between 1850 and 1859 and during that time the journal campaigned in favour of parliamentary reform and improvements in the education of the poor. Dickens's was extremely hostile to the 1834 Poor Law Amendment Act and wrote several articles on the workhouse system. Dickens was also concerned with public health and the reform of the legal system.
When Dickens's argued with the publishers of Household Words in 1859, he closed the journal and replaced it with All the Year Round. The new journal still covered social issues but mainly concentrated on literary matters. Several important novels were serialized in All the Year Round including Dickens's own A Tale of Two Cities (1859) and Great Expectations (1860-61). The journal also published three novels by Wilkie Collins , The Woman in White (1860), No Name (1862) and The Moonstone (1868). Dickens continued to published All the Year Round until his death on 8th June, 1870 " Source: Unknown