Home > Back to Search Results > Lou Gehrig named to Parole Board in 1939...
Click image to enlarge 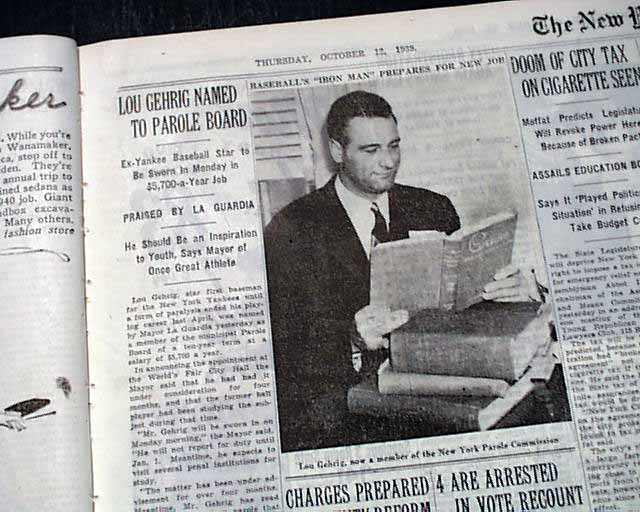 The top of page 27 has a one column heading: "LOU GEHRIG NAMED TO PAROLE BOARD" with subheads and photo. I assume not many people knew that Gehrig took this office shortly before his death. Probably only reported in a NYC publication.
Other news, sports and advertisements of the day. Complete with all 52 pages, rag edition in very nice condition.

wikipedia notes: In October 1939, he accepted Mayor Fiorello La Guardia's appointment to a 10-year term as a New York City Parole Commissioner (Gehrig had moved from New Rochelle to Riverdale to satisfy a residency requirement for the job) and was sworn into office on January 2, 1940. The Parole Commission commended the ex-ballplayer for his "firm belief in parole, properly administered", stating that Gehrig "indicated he accepted the parole post because it represented an opportunity for public service.