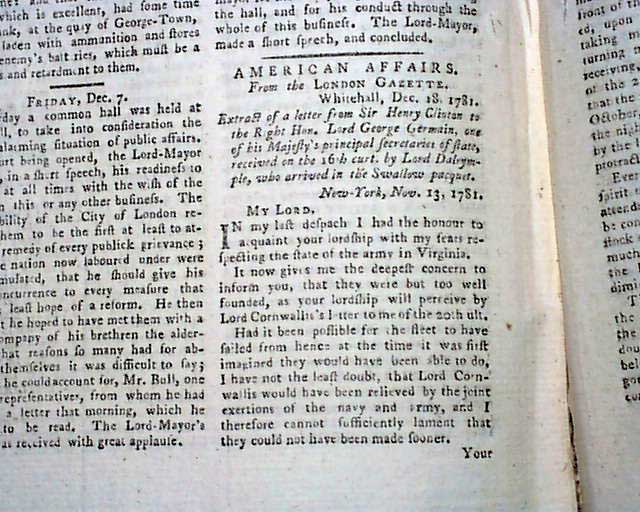 Certainly the most historic report in this issue--and perhaps in any issue from the Revolutionary War--is that near the back of the issue under "American Affairs". It is an "Extract of a Letter from Sir Henry  Clinton to...George Germain..." dated at New York, Nov. 13, 1781, which has: "In my last dispatch...my fears respecting the state of the army in Virginia. It now gives me the deepest concern to inform you that they were but too well founded..." with more on the introduction of the: "Letter from Lt. General Earl Cornwallis, to Sir Henry Clinton, dated York-Town, in Virginia, Oct. 20, 1781".  And what follows is the historic letter which begins with the famous sentence: "I have the mortification to inform your Excellency, that I have been forced to give up the posts of York and Gloucester, and to surrender the troops under my command, by capitulation, on the 19th instant, as prisoners of war to the combined forces of America and France..." with much more, it taking nearly 2 pages and signed in type: Cornwallis.
Both plates called for are present, one of "Lord Camden" and the other a foldout showing a timepiece at St. Paul's Cathedral.
Included as well is the 34 pages "Appendix" issue for the year.
Complete in 82 pages with the Appendix, 5 by 8 inches, very nice condition.