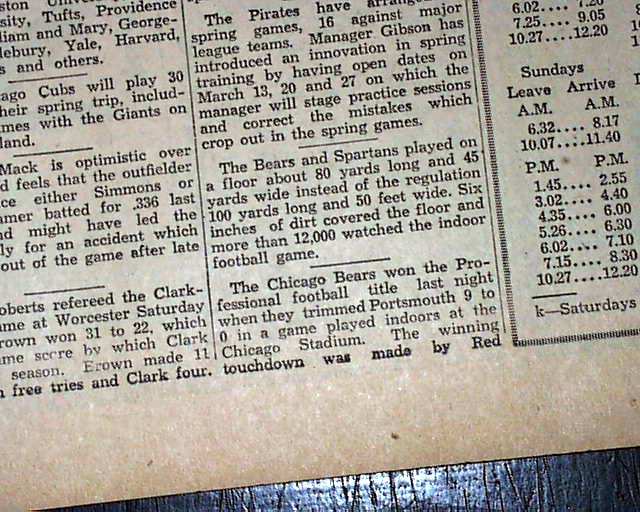 The bottom of page 8 has a discrete and brief report with no heading & text that begins with: "The Chicago Bears won the Professional football title....". (see) First report coverage on the very 1st NFL title game ever played. (historic) The game was played between the Chicago Bears and the Portsmouth Spartans. Unfortunate for the small, discrete report here but still a first report.
Complete with all 12 pages, a few small binding holes along the spine, generally nice.

wikipedia notes: The 1932 NFL Playoff Game was the first ever playoff game held by the National Football League (NFL), the major professional American football sports league in the United States. Due to extremely cold weather, the game was played indoors on December 18, 1932 at Chicago Stadium in Chicago. The final score was Chicago Bears 9, Portsmouth Spartans 0.

The game paved the way for a new era of professional American football. After following the rules of college football for its first 13 years of existence, the NFL began to develop its own rules. The popularity of the game also led the league to start holding annual playoff games. Thus, the 1932 NFL Playoff Game is sometimes unofficially called the 1932 NFL Championship Game.

Furthermore, the game is regarded as the first ever major indoor football game.