Home > Back to Search Results > Battle of Stony Point...
Click image to enlarge 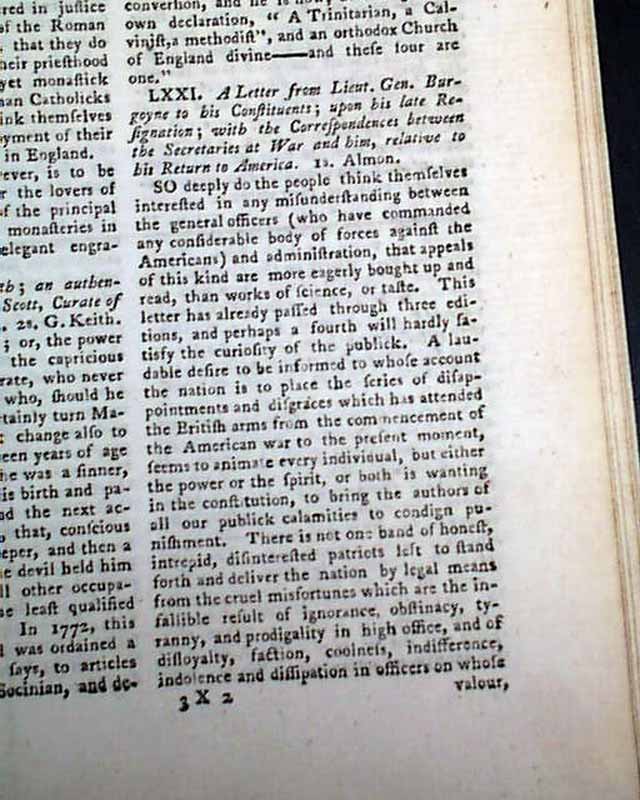 Listed under "Review of New Publications" is: "A Letter from Lt. Gen. Burgoyne to his Constituents; Upon his Late Resignation; with the Correspondences Between the Secretaries at War & Him, Relative to his Return to America" which takes 1 1/2 pages with much on the situation in America.
Near the back is much reporting under: "American Affairs" including a: "Letter from General Sir Henry Clinton to Lord George Germain" dated at Dobb's Ferry with reports on the Battle of Stony Point, a victory for American forces under the command of Anthony Wayne.
This is followed by another letter on Stony Point, and then a list of killed, wounded and missing.
There is also a fine & lengthy letter from Major General Tryon to General Henry Clinton, dated at New York, July 20, concerning his actions from July 3 thru 14, 1779 including the number of killed, wounded and missing. And the back page has a letter from General Henry Clinton to Lord George Germain dated at New York.
Both plates called for are lacking.
Complete in 48 pages, 5 by 8 inches, very nice, clean condition.