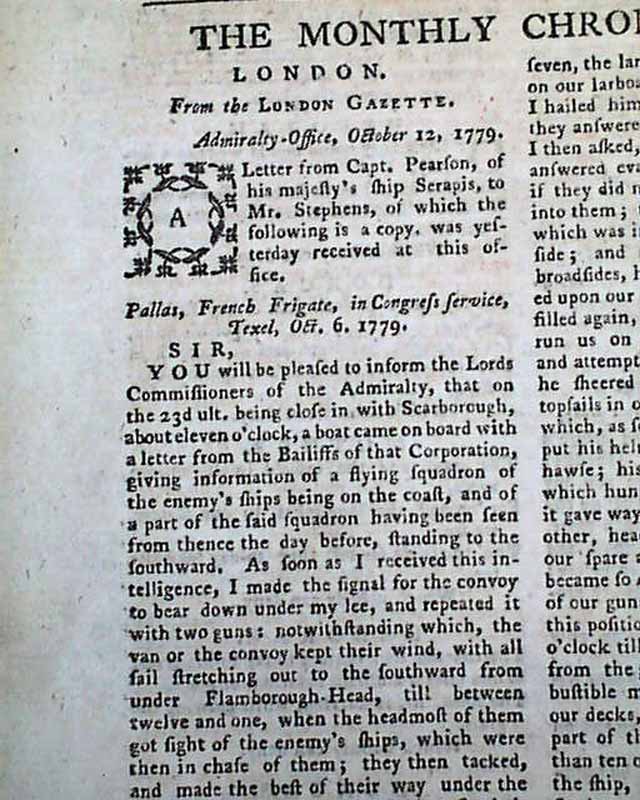 THE LONDON MAGAZINE, England, October, 1779   Included is a terrific & detailed letter reporting the famous battle involving John Paul Jones and his ship the Bonhomme Richard, prefaced with: "A Letter from Capt. Pearson of His Majesty's ship Serapis..." datelined Oct. 6, 1779 with the letter taking nearly two pages and containing a great amount of detail on this battle. One portion notes: "...when we found her to be an American ship of war called the Bon Homme Richard, of Capt. Paul Jones...on my going on board the Bon Homme Richard I found her in the greatest distress...she was also on fire in two places...they were obliged to quit her & she sunk with a great number of her wounded people on board...our loss in the Serapis was also very great..." with so much more.
This report is followed by two others which add some particulars on the battle.
Further on under: "American Affairs" is a notable letter from General Prevost to Lord G. Germain dated at Savannah in which he details his victory at the Battle of Stono Ferry, the attack led by American General Benjamin Lincoln.
Both plates called for are lacking, neither relating to the mentioned content.
Complete in 48 pages, 5 by 8 inches, very nice, clean condition.