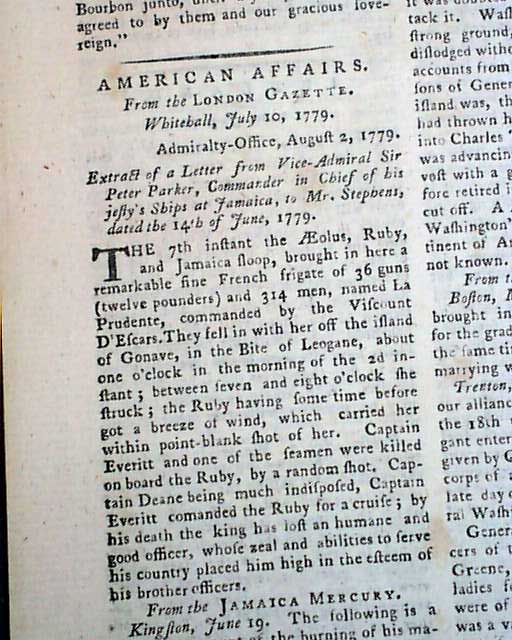 Near the back is a full page headed: "American Affairs" which includes a letter from Vice Admiral Peter Parker on events at Jamaica.
Also a report noting: "...The American fort commanded by General McDougal was so strong, being situated in a mountainous & almost inaccessible country...it was doubted if General Clinton would attack it. Washington had taken posts in very strong ground from which he could not be dislodged without great loss & difficulty...General Prevost's retiring to John's Island was that the Polish Count Pulaski had thrown himself with a considerable force into Charles Town [Charleston], which General Lincoln was advancing in the rear of General Prevost with a great army...A Feu de Joye had been fired in Washington's army, & over the whole continent of America, but the reason of it was not known."
Even much more reporting (see the photos) including reports from Boston and Trenton mention celebrations for the anniversary of the alliance with France mentioning General Washington, Mrs. Washington, Mrs. Greene, and Mrs. Knox.
Both plates called for are lacking.
Complete in 48 pages, 5 by 8 inches, very nice, clean condition. Bit close-trimmed at the right side of the title/contents page just touching the engraving.