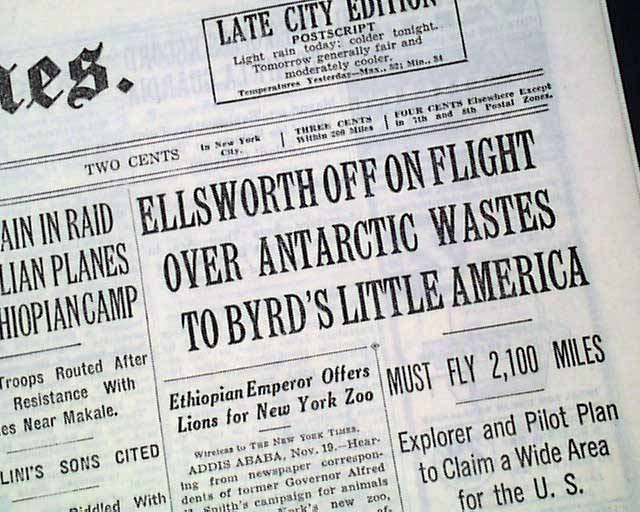 The top of the front page has a two column headline: "ELLSWORTH OFF ON FLIGHT OVER ANTARCTIC WASTES TO BYRD'S LITTLE AMERICA" with subheads. (see) Lengthy 1st report coverage continues inside with photo of Ellsworth and related map. (see)
Other news, sports and advertisements of the day. Complete in 48 pages, this is the rare rag edition that was produced on very high quality newsprint, with a high percentage of cotton & linen content, allowing the issues to remain very white & sturdy into the present. Given the subscription cost, libraries & institutions rather than individuals were the primary subscribers of these high-quality editions. Nice condition.

wikipedia notes: On November 23, 1935, Ellsworth discovered the Ellsworth Mountains of Antarctica when he made a trans-Antarctic flight from Dundee Island to the Ross Ice Shelf. He gave the descriptive name Sentinel Range, which was later named for the northern half of the Ellsworth Mountains. During the flight, his aircraft ran out of fuel, forcing a landing near the Little America camp established by Richard Byrd. Because of a faulty radio, he and his pilot, Herbert Hollick-Kenyon, were unable to notify authorities about the landing. The two men were declared missing, and the British research ship Discovery sailed from Melbourne, Australia on a search mission. The two men were discovered January 16, 1936, after almost two months alone at Little America. They returned to New York City on April 6, and their support ship, the MS Wyatt Earp, arrived separately two weeks later.