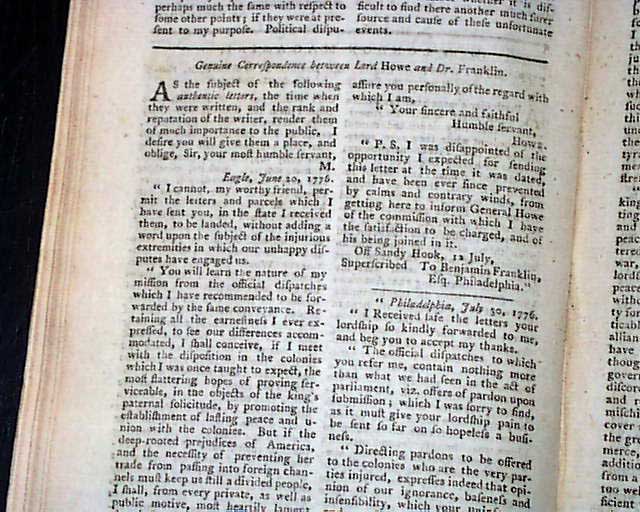 The prime content is an excellent letter written & signed by G. Washington dated "Headquarters, New Town, Dec. 26, 1776" which describes his crossing of the Delaware River, reading in part: "I have the pleasure of congratulating you upon the success of an enterprize, which I had formed against a detachment of the enemy lying in Trenton, and was executed yesterday morning. The evening of the 25th I ordered the troops intended for this purpose to parade to the back of McKenky's Ferry that they might begin to pass as soon as it grew dark...but the quantity of ice made that night, impeded the passage of the boats so much, that it was three o'clock before the artillery could be got over...formed my detachment into two divisions...to push directly into the town, that they might charge the enemy before they had time to form..." with further particulars of the ensuing battle. Washington also reflects on the trying situation by saying: "...the difficulty of passing the river on a very severe night and their march through a violent storm of snow and hail did not in the least abate their ardour..." Very historic reading, and one of the very few accounts of this event which gives some detail of the now-famous event of Washington crossing the Delaware, and from Washington himself.
Another great highlight of this issue is an excellent & somewhat lengthy letter by Ben Franklin. It is prefaced by: "A Letter from Lord Howe to Dr. Franklin" & signed by him in type: Howe, to which Franklin responds.
Franklin's letter is datelined Philadelphia, July 30, 1776, portions including: "...It is impossible we should think of submission to a government that has, with the most wanton barbarity & cruelty, burnt our defenceless towns in the midst of winter; excited the savages to massacre our peaceful farmer, and our slaves to murder their masters...These atrocious injuries have extinguished every spark of affection for that parent-country we once held so dear..." and so much more. It is signed in type: B. FRANKLIN, and takes over a full page.
Near the back is a fine letter from General Howe to Lord G. Germaine dated at New York concerning military events there. Even more--including naval events--on the back page.
Lacking both plates called for.
Complete in 56 pages, 5 by 8 1/4 inches, great condition.