Home > Back to Search Results > The Boston Port Bill and the colonists' problem with England's power over the colonies...
Click image to enlarge 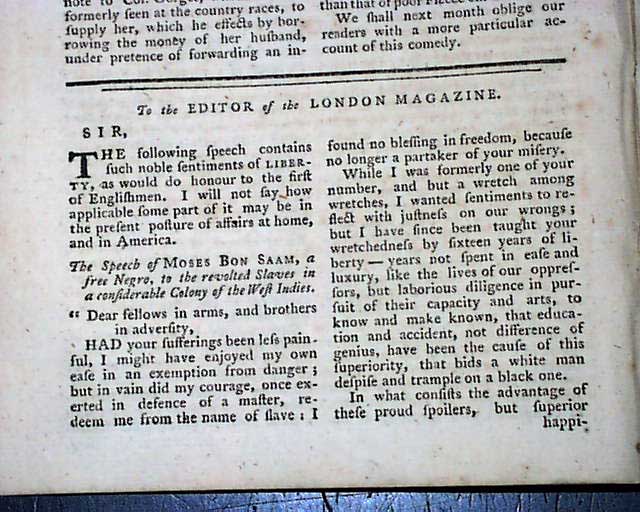 The Boston Port Bill and the colonists' problem with England's power over the colonies...

Among the articles is: "The Speech of Moses Bon Saam, a Free Negro, to the Revolted Slaves in ...the West Indies" which takes nearly 1 1/2 pages.
In: "Review of New Publications" is: "Thoughts on the Act for Making More  Effectual Provision for the Government of the Province of Quebec" and; "Observations on the Act of Parliament Commonly Called  the Boston Port Bill..." both of which are among the hated Intolerable Acts.
The bkpg. has news headed: "America" which notes: "The consequences of blocking up the port of Boston become every day ore serious...at least in appearance every part of America must feel the shock & experience the most dreadful calamities...The Bostonian seem to have no objection to pay for the tea they destroyed, but to acknowledge the power which the parliament of Great Britain claim over their charters, is a concession they at present seem no ways inclined to make. Let us hope that some means will be speedily found to put an end to these fatal disputes between the colonies and their mother country." But that would certainly not happen soon.
Included also is a foldout piece of music. The other 2 plates called for are lacking.
An interesting feature is the full title/contents page which has a very intricately engraved view of the skyline of London at the time, making this very decorative.
Complete in 52 pages, 5 1/4 by 8 1/4 inches, very nice condition.