Home > Back to Search Results > Howe offers free land in the colonies for those who enlist...
Click image to enlarge 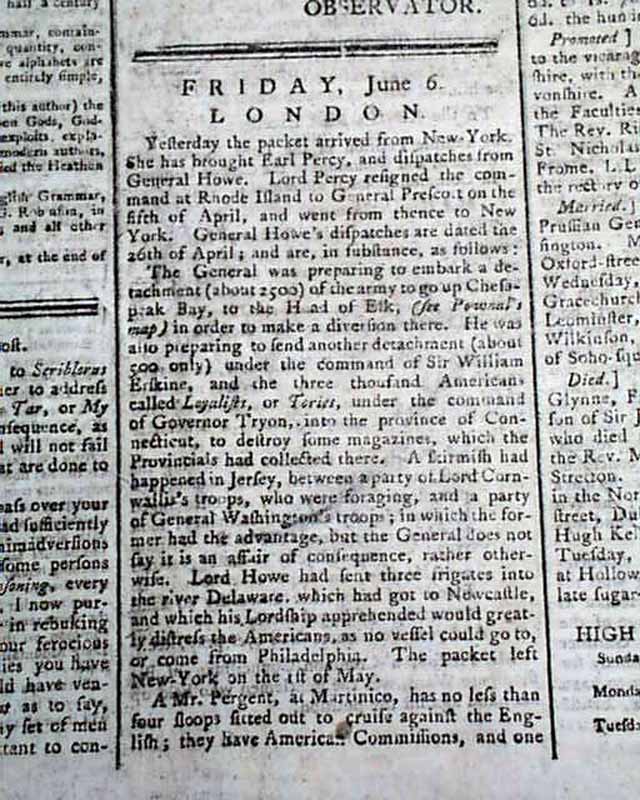 Howe offers free land in the colonies for those who enlist...


THE LONDON EVENING POST, England, June 7, 1777  The front page has some news from America concerning the war, bits including: "...General Howe...preparing to embark...to go up Chesapeak Bay...another detachment...and the 3000 Americans called Loyalists, or Tories, under the command of Governor Tryon, into the province of Connecticut to destroy some magazines...skirmish had happened in Jersey between a party of Lord Cornwallis's troops...and a party of General Washington's troops..." with more.
Page 2 has: "Advices from America" featuring a "Proclamation" offering free land in the colonies at the war's end to all those who enlist in the British service for two years. Also news from New York.
Page 3 continues with news from New Jersey, plus: "...Very few Americans have joined General Howe...King's army are reckoned to have lost 4000 men in Jersey...Many of the Hessians have lately deserted...By deserters from General Washington his army...was said to be 45,000 men..." with more. A bit on the location of General Lee s well.
The back page has additional news from New Jersey on the war.
Four pages, folio size, never-trimmed margins, red tax stamp on the front page, nice condition.