Home > Back to Search Results > Washington's victories at Trenton and Princeton...
Click image to enlarge 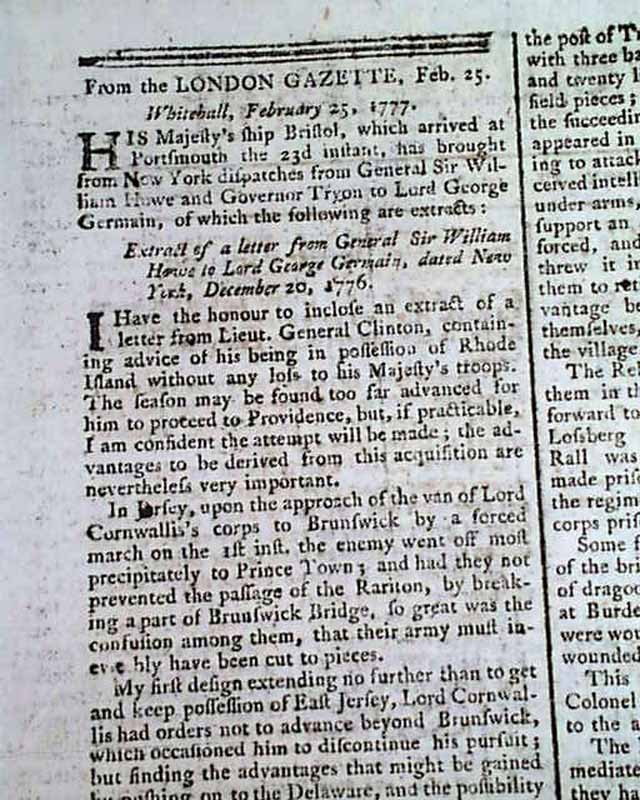 Washington's victories at Trenton and Princeton...


THE LONDON EVENING POST, England, Feb. 27, 1777  This terrific issue has such a great wealth of reporting on the Revolutionary War that all cannot be detailed in this listing. See the many photos for much of the text.
But certainly the most notable content is the page 2: "Extract of a Letter from General Sir William Howe to Lord George Germain, dated New York, Dec. 20, 1776" in which he gives much detail of events in the Revolutionary War. Curious that it includes: "Lord Cornwallis...halted at Maidenhead, six miles from Trenton, & marched...to Corriels Ferry...in some expectation of finding boats there & in the neighbourhood, sufficient to pass the river; but in this he was disappointed, the enemy having taken the precaution to destroy or to secure one the south side, all the boats that could possibly be employed for this purpose. The passage of the Delaware being thus rendered impracticable...".
This report is then followed by an "Extract of a letter from General Sir William Howe to Lord George Germain, dated New York, Dec. 29, 1776" which begins: "On the 25th instant, in the evening, a party of the enemy attacked an out-guard from the post of Trenton, where colonel Rall commanded with 2 battalions of Hessians...which party was beaten back. On the succeeding morning at six o'clock the rebels appeared in force with cannon...The rebels, without advancing, cannonaded them in this situation...the rebels recrossed the river Delaware immediately with the troops & cannon that they had taken..." with more. This report is followed by the list of the killed, wounded & missing.
This report is of the battle which resulted from the famous "crossing of the Delaware" River by Washington & his troops on Christmas night & his surprise attack on the Hessians. This success did much to instill some hope in the colonial cause which had become quite dismal at this point in the war.
As you see in the photos there is no specific mention of Washington "crossing the Delaware" but they do specifically mention his recrossing the Delaware after the battle.
Also on page 2 is an: "Extract of a letter from Governor Tryon to Lord George Germaine, dated New York, Dec. 24, 1776".
So much more fine content. Be sure to see all the photos.
Four pages, never-trimmed margins, red tax stamp on page 3, good condition.