Home > Back to Search Results > Latest news from the Revolutionary War...
Click image to enlarge 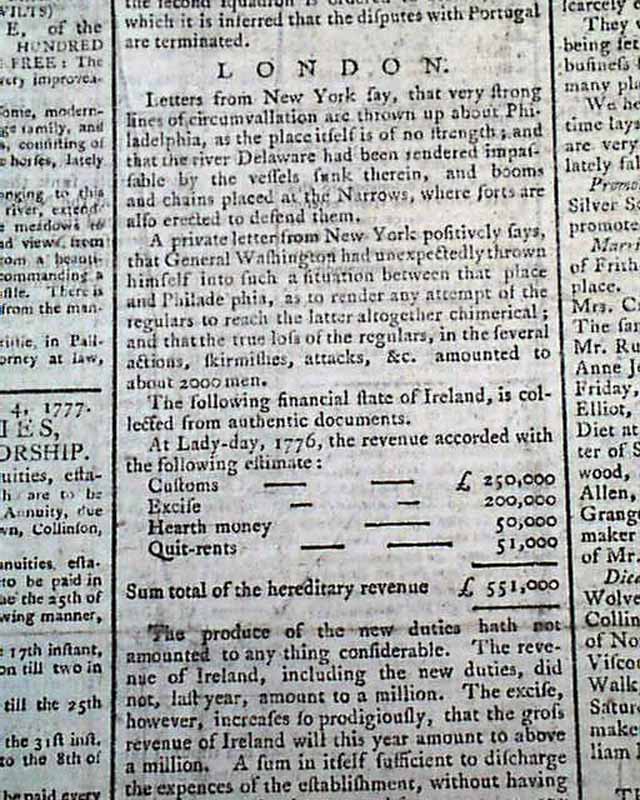 Latest news from the Revolutionary War...


THE LONDON EVENING POST, England, Jan. 7, 1777  The front page has a report beginning: "...from New York...that very strong lines of circumvallation are thrown up about Philadelphia...and that the river Delaware had been rendered impassable...and booms and chains placed at the Narrows...that General Washington had unexpectedly thrown himself into such a situation between that place and Philadelphia as to render any attempt of the regulars to reach the latter altogether chimerical...".
Page 3 has a report:"...The prisoners taken in the different skirmishes in America have been offered pardons  other conditions if they would take the oaths of allegiance, which they have refused to a man...Washington's conduct has given general Howe a very high opinion of him. Gen. Lee is thought little of; they say he is a brave soldier, but that Washington is a general..." with more.
The back page has a letter from New York noting the situation there (see photos).
Four pages, never-trimmed margins, red tax stamp on page 3, very nice condition.