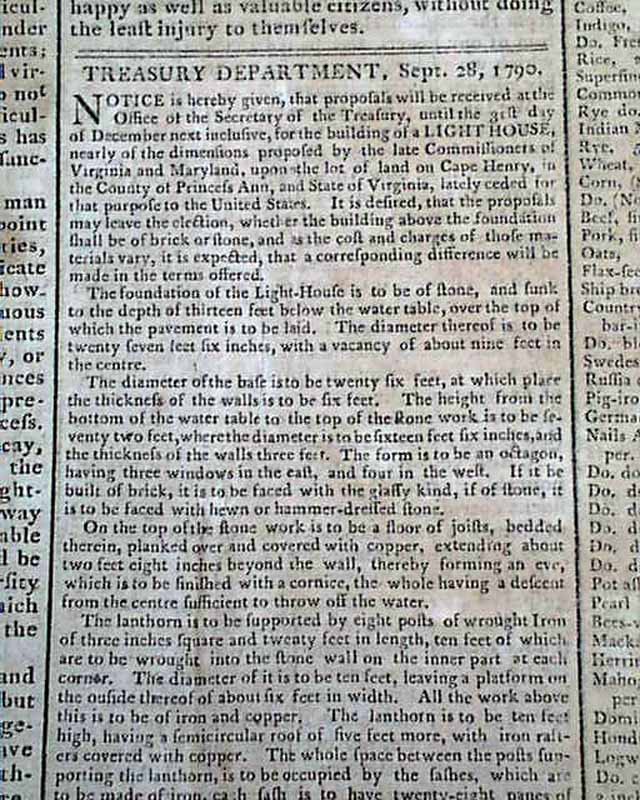 
GAZETTE OF THE UNITED STATES, New York, Oct. 13, 1790  This issue might  be more desirable for what's in the dateline rather than in the text, as this was the last issue of this famous newspaper to be published in New York City. When the nation's capital moved from New York to Philadelphia this newspaper moved as well as it was the "voice" of the government to all who read this newspaper. There would be a nearly 3 week gap before the paper would again begin publishing in Philadelphia on November 3.
The back page has a nearly half column "Treasury Department" notice which is signed in type: Alexander Hamilton, Secretary of the Treasury, soliciting proposals for rations needed by the military.
The back page also has a lengthy "Treasury Department" document seeking bids for what would become the historic Cape Henry lighthouse in Virginia.
The bottom of the ftpg. has a small "War Department" notice signed: H. Knox, Secretary for the Department of War.
Four pages, loss to an upper corner of the front leaf affects nothing on the ftpg. and just two words on page 2. Light foxing & damp staining.