Home > Back to Search Results > On the historic Funding Act... Building the Cape Henry lighthouse... Much more...
Click image to enlarge 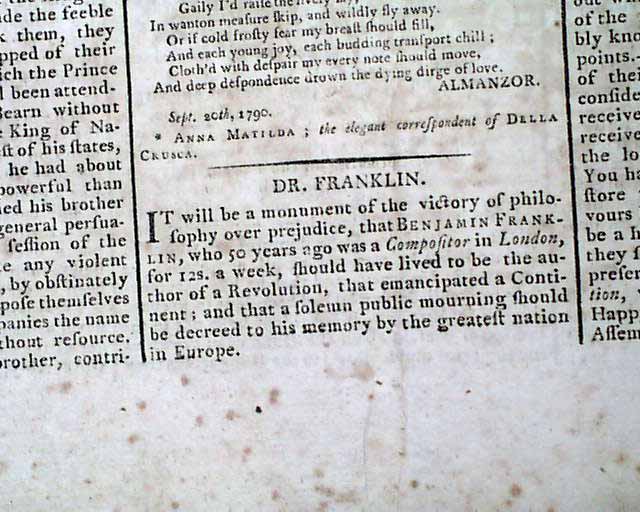 On the historic Funding Act... Building the Cape Henry lighthouse... Much more...

The back page has not one, but two documents from the "Treasury Department" concerning carrying into effect the historic Funding Act of 1790, whereby the new federal government would assume the debts of the individual states incurred during the Revolutionary War.
The back page also has a "Treasury Department" document on seeking bids to build what would become the historic Cape Henry Light House in Virginia. And a small item from the "War Department signed: H. Knox, on pensions to soldiers from the war.
The front page has a brief item on the death of Ben Franklin headed: "Dr. Franklin" and noting: "...that Benjamin Franklin, who 50 years ago was a compositor in London for 12 shillings a week, should have lived to be the author o a Revolution that emancipated a continents; and that a solemn public mourning should be decreed to his memory by the greatest nation in Europe."
A page 3 report from Boston notes: "Yesterday, sailed from this report, the ship Columbia, Capt. Robert Gray, on a circum-navigatory voyage to the North-West coast of America. This is the second voyage the Columbia has made to the coast...The native of Owhyhee [Hawaii] has returned to the place of his nativity."
Other news item noted in the photos.
Four pages, wide, never-trimmed margins, scattered foxing, nice condition.