Home > The federal "edifice" is complete...
Click image to enlarge 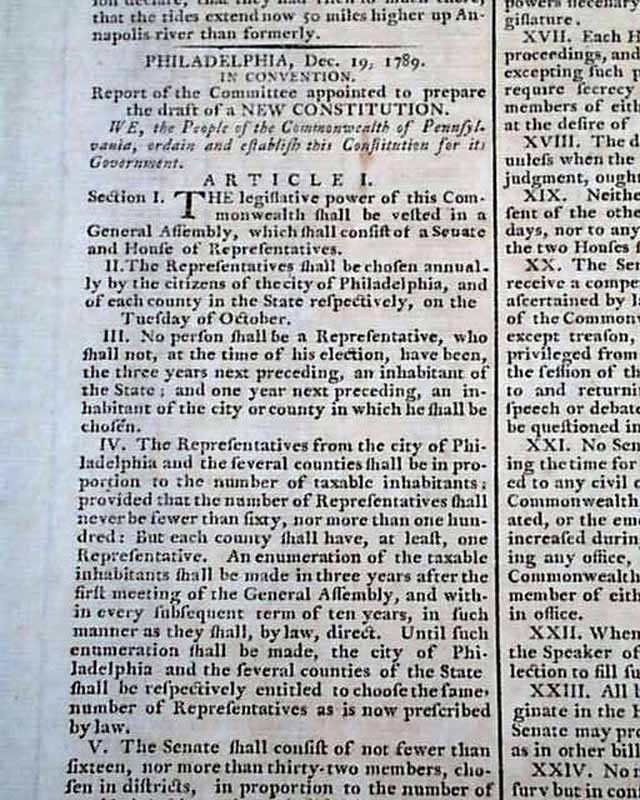 The federal "edifice" is complete...

A page 3 report from Boston dated December 16 concerns the ratification of the Constitution by all of the states, except Rhode Island. The report reads in full: "The Twelve States of America, convened in Federal Convention, which proposed the Constitution, have now all adopted, ratified and confirmed it. The Edifice may now be declared complete--and on its completion we cordially felicitate our country."
Hereafter is a list of the states and the dates they ratified the Constitution.
Two-thirds of the state were needed for ratification and this occurred when New Hampshire adopted the Constitution on June 21, 1788. The last state on this list to ratify was North Carolina, on Nov. 20, 1789.
Other notable content includes the "Report of the Committee to prepare the draft of a New Constitution" for the Commonwealth of Pennsylvania, containing the text of eight articles.
A brief bit references the French Revolution with: "The King still resides in the Thuilleries, guarded by the national militia...". The back page contains two letters signed by John Adams from 1780, and also has an "Abstract of Journal of the First Session of the Senate of the United States."
Four pages, never-trimmed margins, very nice condition.