Home > Back to Search Results > On the victory at Charleston plus so much more...
Click image to enlarge 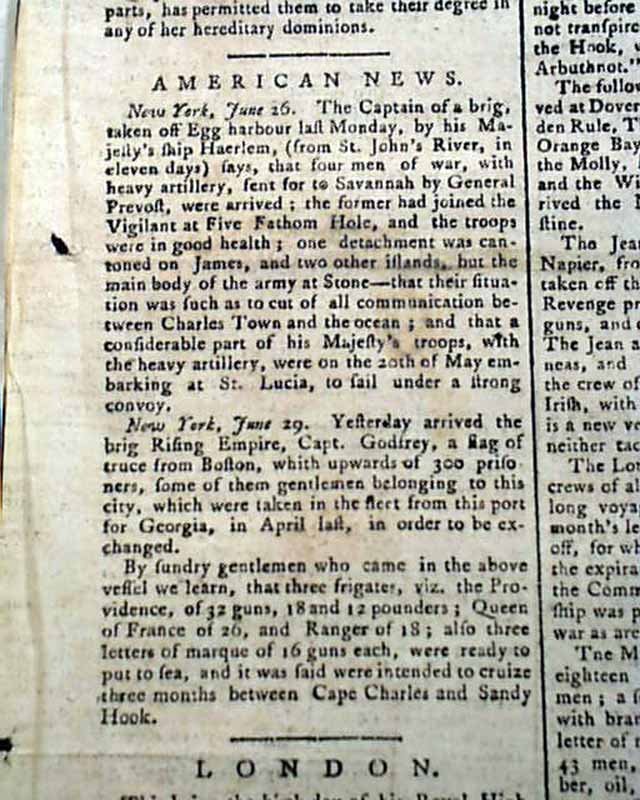 
THE LONDON EVENING POST, England, Aug. 12, 1779  The ftpg. has a brief bit: "...A letter from New York...says that Gen. Prevost has been obliged to retreat from before Charles Town, but had got safe back to Fort Beaufort without the loss of any men...".
Pages 3 & 4 have much war reporting including: "...That Gen. Prevost had summoned the inhabitants of Charles Town to surrender who desired 3 days to draw up their capitulation, which was agreed to; that in the interim they were reinforced with a large body of horse and foot; when an answer was returned that they would defend the place to the last extremity."
Then there are reports from Canada, Crown Point and Ticonderoga concerning the military events there (see). Page 3 also has a lengthy letter which reflects upon the actions of the war (see for portions).
Nearly half of page 4 has various reports on the war, too much to mention here but most are visible in the photos.
The front page has: "AMERICAN PRISONERS - The following sums have been received towards their relief:" followed by the list.
Four pages, folio size, never-trimmed margins, red tax stamp on page 3, very nice condition.