Home > Back to Search Results > Terrific issue discussing amendments to the Constitution...
Click image to enlarge 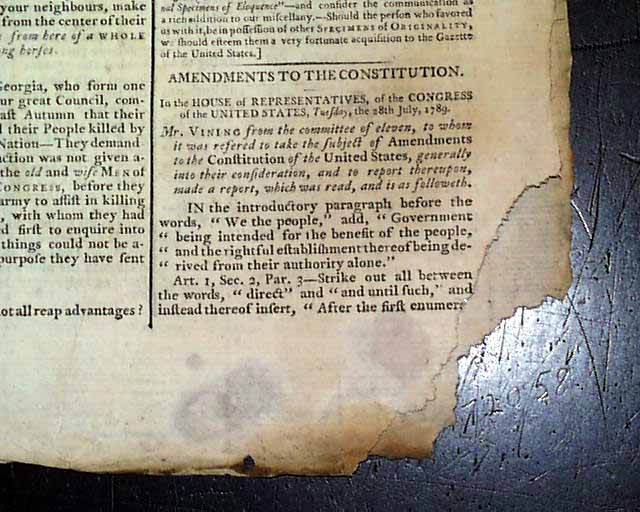 A terrifically historic issue as this is one of the early newspapers to be found with a very early printing of proposed amendments To The Constitution, which would ultimately become the Bill of Rights.
Beginning on the front page and taking one-third of page 2 is noteworthy reporting on: "Amendments To the Constitution", which begins with: "In the introductory paragraph before the words, 'We the people,' add, 'Government and the rightful establishment thereof being derived from their authority along.'..." followed my many more suggestions that come from "Mr. Vining from the committee of eleven, to whom it was referred to take the subject of Amendments to the Constitution...into their consideration...".
Debates and further discussions on the necessary amendments to the new Constitution would ultimately result in the first ten amendments, more commonly known as the Bill of Rights. A very significant issue reporting the details of that effort.
Page 3 contains reports from Congress, providing some interesting insight into the discussions from the founding months of the federal government.
Four pages, some loss to a lower corner affects just one letter on the ftpg. and nothing on page 12, 3 or 4. Otherwise never bound nor trimmed with wide margins, in nice condition.