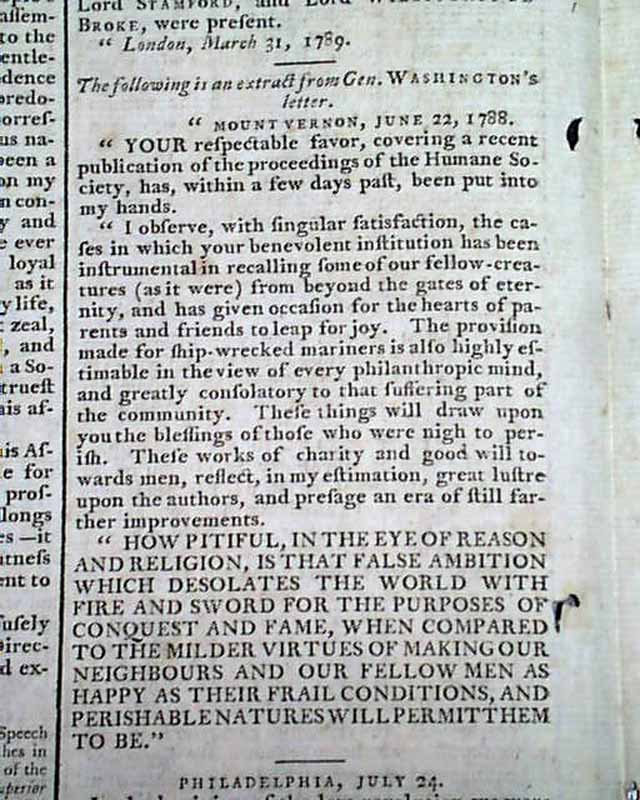 Considered by many as the most significant newspaper of the 18th century, particularly during this, the formative year of the new federal government, as the Gazette was the mouthpiece of all matters political. Most pronouncements from Congress & the President were printed first in this newspaper.
Holding true to this statement, page 3 contains the first newspaper printing of the Act of Congress which created the State Department, titled: "An Act for Establishing an Executive Department to be Denominated the Department of Foreign Affairs". This was the first executive department created by Congress. A bit later the name would be changed to the State Department. This act is signed in type by both the President and the Vice President: G. Washington, and John Adams.
Page 2 contains a letter from General Washington, datelined Mount Vernon, June 22, 1788 which relates in part to the work of the Humane Society. This is followed by an item concerning selling land in the Western Territorial to pay for the debt from the Revolutionary War. An item notes: "Mrs. Washington, we are informed, will be at home every Friday, at eight o'clock, P.M. to see company."
The back page includes an address from the governor of North Carolina "To his Excellency George Washington, Esquire, President of the United States" upon his election, and noting that: "...Though this state be not yet a member of the Union under the new form of government, we look forward with the pleasing hope of its shortly becoming such...". North Carolina would ratify the Constitution on Nov. 21. This letter is responded to by the President, signed: G. Washington.
Four pages, never bound with wide, untrimmed margins, very nice condition.