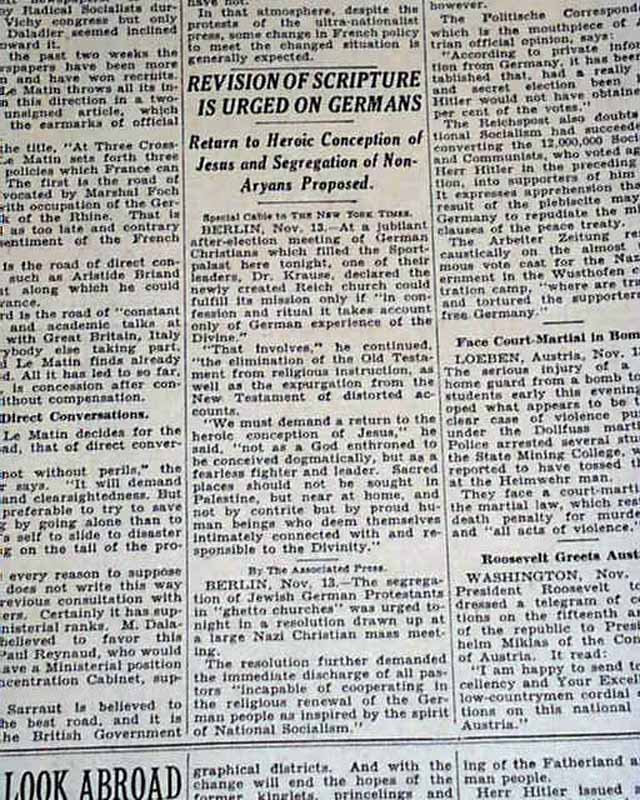 * Reinhold Krause, leader of German Christians
* Denounces the Jewish aspects of Christianity
* Calls for a purge on Jewish elements of faith

Page 14 has one column headings: "Revision Of Scripture Is Urged On Germans" "Return to Heroic Conception of Jesus and Segregation of Non-Aryans Proposed" (see)
Other news, sports and advertisements of the day. Complete in 40 pages, light toning at the margins, nice condition.

wikipedia notes: The first rally of Germany's Protestant Reich Church was held at the Sports Palace in Berlin, and attracted 20,000 German Christians, but a speech by the keynote speaker, Berlin church leader Reinhold Krause, was so extreme in its anti-Semitism that it discredited the Nazi-supported institution. Dr. Krause advocated the removal of the Old Testament, "with its cheap Jewish morality of exchange and its stories of cattle traders and pimps" from German Bibles as well as "the teachings of the 'Rabbi Paul'" from the New Testament, and de-emphasizing symbols of the crucifixion and of a "meek and suffering" Christ. Krause clarified his remarks days later by saying that "It is true that I reject the Old Testament as having no meaning for the Nordic race and I do not accept efforts to explain Christ in terms of Old Testament prophesies... but I never decried the use of the crucifix. What I actually said on that point was the following: That we must demand a return to the heroic Jesus whose life was an example to us and whose death is a seal upon a life of heroism and struggle. We must be careful, however, not to exaggerate Christ crucified."