Home > Back to Search Results > The Massacre at Tappan... Wealth of other great reporting...
Click image to enlarge 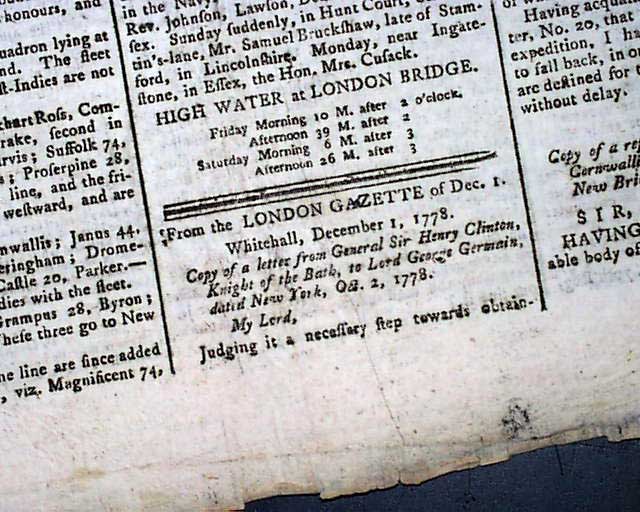 The Massacre at Tappan... Wealth of other great reporting...


THE LONDON EVENING POST, England, Dec. 3, 1778  The ftpg. has over a full column taken up with a letter from General H. Clinton the Lord G. Germain as well as to the U.S. Congress concerning America not fulfilling the treaty agreements concerning captured soldiers from their victory over Burgoyne at Saratoga. The response from Congress was terse: "Your letter of the 19th was laid before Congress, and I a directed to inform you that the Congress of the United States of America make no answer to insolent letters."
Then Clinton's letter to General Cornwallis which carries over to page 2 concerning actions in New Jersey along the Hudson
river with comments on General Washington's army and planks of Lord Cornwallis (see). This is followed by a fine letter to General Clinton signed in type: Cornwallis, concerning the massacre at Old Tappan, New Jersey, also known as the "Baylor Massacre".
At it the British sent a strong force commanded by Major General Charles Grey to forage on the Hudson. Lt. Col. George Tappan, commanding 100 Continental soldiers, is surprised during the night by these British led by Loyalist guides. The Americans lose 30 killed and another 50 captured.
Fully half of page 2 is taken up with some very fine accounts of military action in New Jersey with two letters dated at Little Egg Harbor.
Over half of the back page is: "...a fuller account than has yet appeared in the papers of what passed between Lord George Germaine and General Burgoyne in the House of Commons...". This concerns the review of the actions of Burgoyne in America and what caused his need to surrender at Saratoga.
Four pages, folio size, never-trimmed margins, red tax stamp on page 3, nice condition.