Home > Back to Search Results > Pressure to end the war in America: ministers remain obstinate...
Click image to enlarge 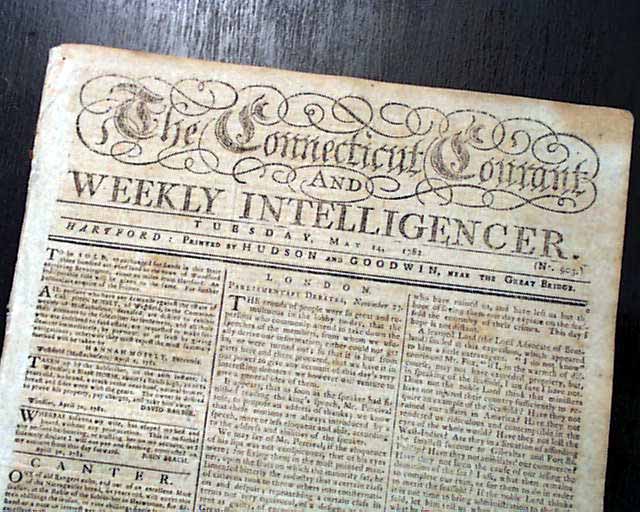 Pressure to end the war in America: ministers remain obstinate...

The front page has mention from London that: "The measures which injured the King's affairs the most in Virginia was the news arriving there that Lord Dunmore was to be their governor again...it arrested the activity of every man inclined to loyalty & quickened with exasperated force the enmity of the rebels...".
Page 2 has several items strongly urging the end to the war in America. One item from council to London states: "...impelled to implore this Honourable House to interpose in such manner as to their wisdom shall seem most effectual for preventing the continuance of the unfortunate war with America." and then an item from the House of Commons: "...that the further prosecution of offensive war on the continent of North America for the purpose of reducing the revolted colonies to obedience by force, will be the means of weakening the efforts of this country against the European enemies." This is followed by the King's response to this. And this is followed by  the House of Commons' response to the King's reply, which includes: "...to take such measures as shall appear to his Majesty to be most conducive to the restoration of harmony between Great Britain and the revolted colonies so essential to the prosperity of both..." and more.
There is also a report that: "...Mr. Laurens, through the medium of Dr. Franklin, is vested with powers from the American congress for treating of a separate peace with Great Britain". And then also a letter from London noting in part: "...that all parties in opposition have united their forces on the popular ground of the ruinous consequences of the American war...be that as it may, the event will be that the American war will not be given up, that American independence will not be consented to, nor New York evacuated. This is certainly the determination of the present ministers...".
Also: "General Conway's motion: 'That it is the opinion of this House, not to prosecute the war on the continent of America any longer by force, but to avail themselves of his Majesty's late gracious declaration in favour of the colonies to bring about peace and tranquility."
Page 3 has a letter praising General Greene: "...we remain peaceable ad inactive; there is little opportunity for displaying military talents. General Greene is with much justice greatly esteemed in this country; he possesses great talents as a solder; he is gallant and decisive in action..." with more.
Four pages, decorative lettering in the masthead, very nice condition.