Home > Back to Search Results > Washington offers pardon to deserters from the army...
Click image to enlarge 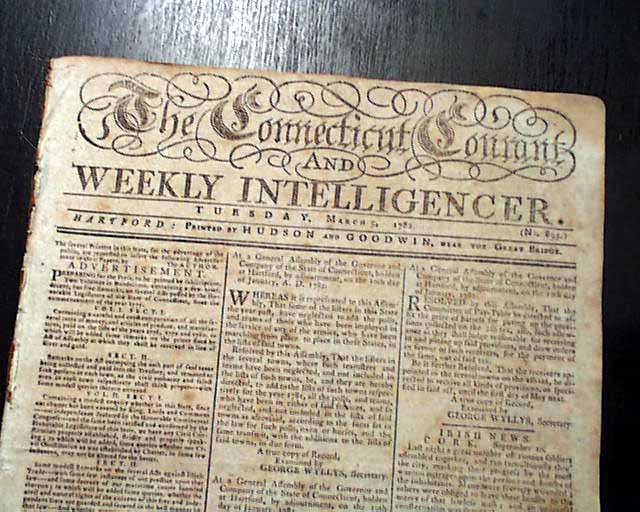 Washington offers pardon to deserters from the army...

The feature of this issue is the: "PROCLAMATION" which appears near the top of page 2, signed in type by: George Washington. It mentions in part: "Whereas there is good reason to believe that there are many deserters from the Continental army...finding themselves deluded by false promises, would willingly return to their colours...Therefore, from motives of humanity...I have thought fit to issue this my proclamation offering free pardon to all deserters...who shall deliver themselves up to any Continental Officer on or before the first day of June next..." with a bit more.
Additionally, there is a letter from Cadiz beginning with a reference to Cornwallis' surrender: "The late success of the combined arms in Virginia...". Also: "We hear that Lt.-General Burgoyne has been lately exchanged, and that Brig. General Moultrie, Col. Pinckney, 1 Lt. colonel, 2 majors, 12 captains, 11 sub-altars and 466 rank and file the whose equal to more than 2000 men, are received for him."
Page 3 has an item mentioning: "...currently reported that Gen. Greene had taken 3000 Hessians...". Another item notes in part: "No less than 11,000 British prisoners are at this time cantoned in different parts of the United States, and it is said the enemy have few or none in the military line to exchange for them. We hear from New York that many of our unfortunate prisoners on board the prison ships in the East River have perished during the late extreme cold weather...".
Four pages, very nice condition.