Home > Back to Search Results > Jackie Robinson breaks the color barrier in 1946...
Click image to enlarge 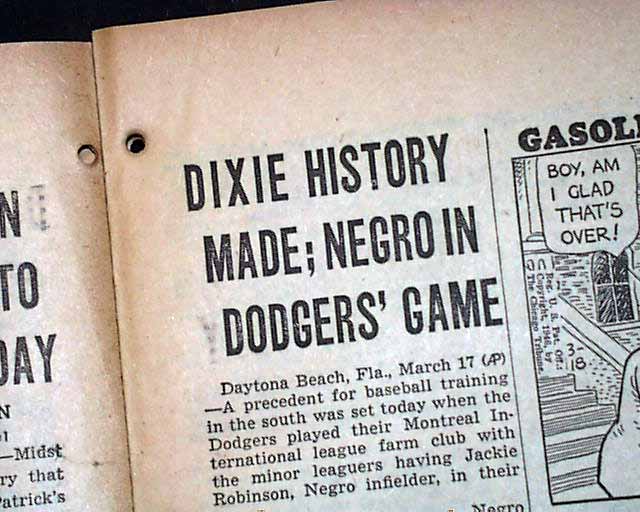 Although Jackie Robinson was the first African-American to play a major league game in 1947, he had already broken another significant color barrier the year prior as a member of the Montreal Royals, the AAA farm team of the Dodgers. As noted in Wikipedia: "Robinson made his Royals debut at Daytona Beach's City Island Ballpark on March 17, 1946, in an exhibition game against the team's parent club, the Dodgers. Robinson thus simultaneously became the first black player to openly play for a minor league team and against a major league team since the de facto baseball color line had been implemented in the 1880s."
The report of this game appears at the top of page 27, with a one column heading: "DIXIE HISTORY MADE; NEGRO IN BASEBALL GAME" (see image). A very significant event not only in the world of sports but in the history of integration in American society. Always nice to have notable events in history reported in this World famous publication.
Complete with all 38 pages, light toning at the margins, small library stamp within the masthead, small binding holes along the spine, generally very nice.