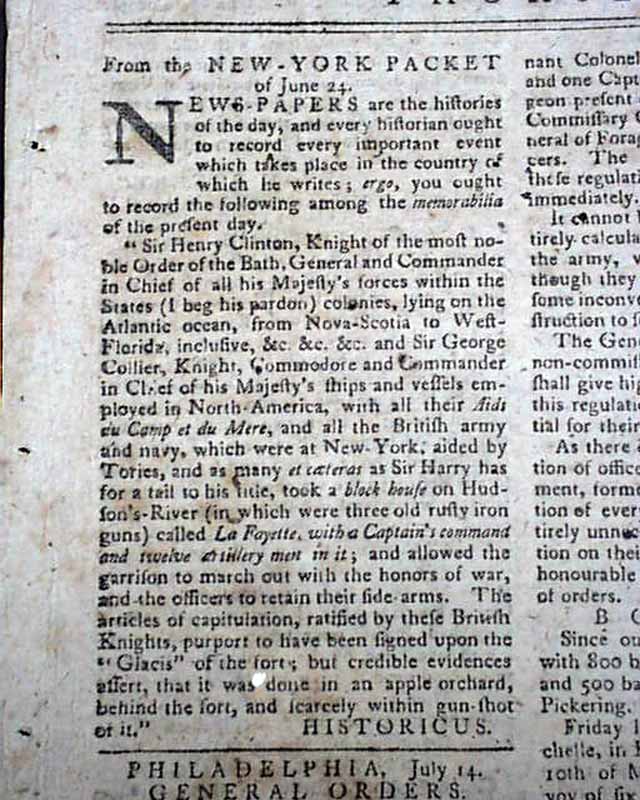 A truly rare title from the Revolutionary War, as it lasted for less than 1 1/2 years from March, 1779 to August, 1781.
The front page has: "General Orders" relating to fixing prices in the colonies, in response to attempts to capitalize on selling food to the French & Continental troops. Other war-related items on the front page as well.
Page 2 has reports on the concern for the depreciating currency, one item including: "The absolute necessity of a common circulating medium for carrying on war & defending against the invasions of a relentless enemy is fully known to every American...". Also a few other war-related items.
The notable content on page 3 is a report on this historic Battle of Stony Point, an important victory for the American forces.
Nearly two-thirds of the back page is taken up with a very detailed report on the sacking of Connecticut coastal towns by Collier and Tryon (see for portions; mouse-chewing affects a few words in the intro but not the body of the letter).
Four pages, never bound no trimmed, loss to the upper right from mouse-chewing affects noting on pg. 1 and just a few words on pgs. 2-4. Otherwise nice condition.