Home > Back to Search Results > Latest news on the war, in a rare newspaper...
Click image to enlarge 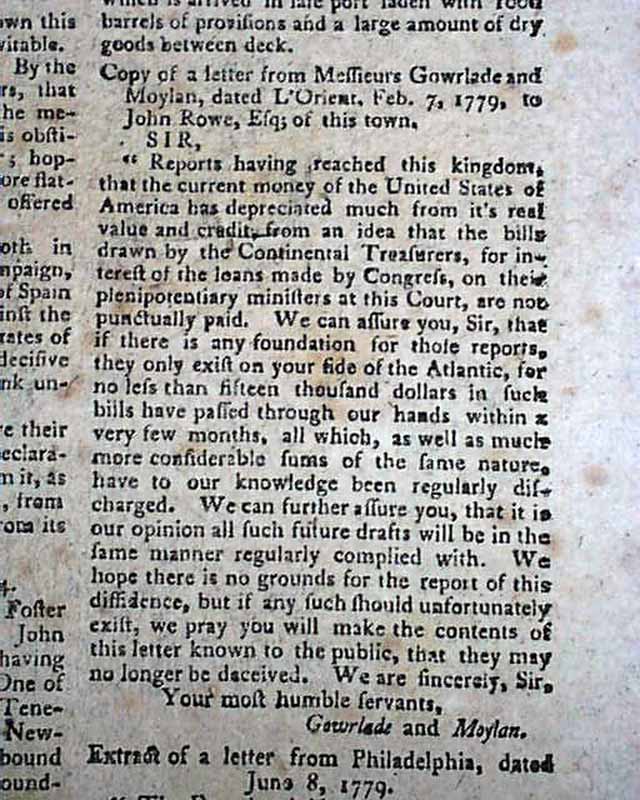 Latest news on the war, in a rare newspaper...

A truly rare title from the Revolutionary War, as it lasted for less than 1 1/2 years from March, 1779 to August, 1781. This is the volume 1, #16 issue.
The front page has a report about the precarious situation of the American currency. Also a letter from Phila. which: "...confirms the account of the defeat of the British troops near Charlestown [Charleston], South Carolina..." with a bit more.
Page 2 has a brief bit about the celebration over the defeat of the enemy at Charleston. Also an item from Pot au Prince noting: "The French are making great captures & daily bringing them to this & other ports...Affairs abroad strike a great damp on our enemies, & we think the war will not be of long continuance. America will secure her trade and independence...".
War reports continue on page 3 with: "We have still from day to day accounts of the good success of our troops to the southward...Nine privateers from New York have been captured & carried in to New London..." plus a letter from General Gates which notes: "...that the enemy are totally defeated and taken prisoners, except a few straggling tories who have fled to the swamps...".
The back page has a report: "...that the enemy are very busy in fortifying at a place called Stoney Point...they have two object in view, the one to make a strong hold in order to enable themselves to send out detachments into Jersey to plunder & forage...the other...to draw the attention of our army from covering the fort at West Point & thereby facilitating an attack against it, which, it is said, is the enemy's main object..." with more.
There is more fine content on the back page as seen in the photos.
Four pages, never bound nor trimmed, loss to the upper portion of the spine is archivally repaired but does cause loss of text to pages 2 and 4 only, not to any mentioned reports. Otherwise, in nice condition as the photos show.