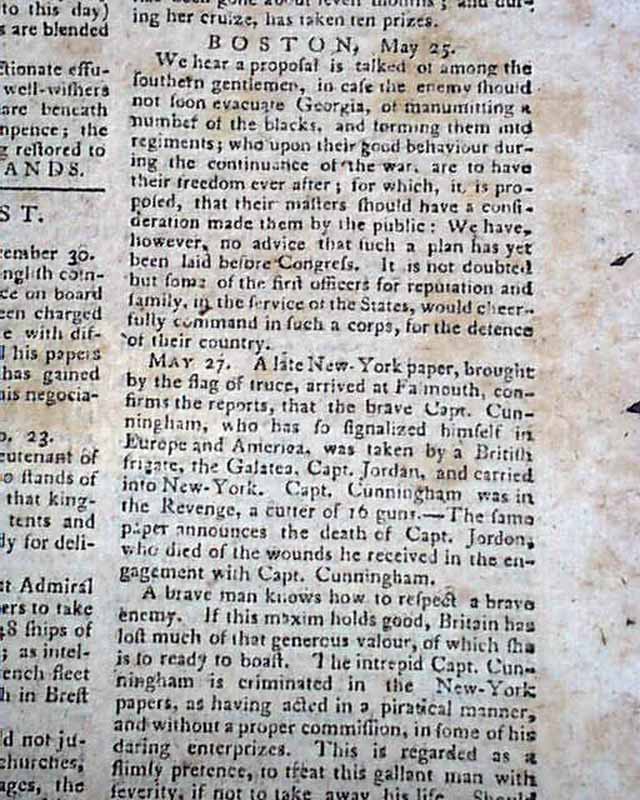 A truly rare title from the Revolutionary War, as it lasted for less than 1 1/2 years from March, 1779 to August, 1781. This is the volume 1, #13 issue.
The front page has a report noting in part: "...a proposal is talked of among the southern gentlemen in case he enemy should not soon evacuate Georgia, of manumitting a number of the black & forming them into regiments, who upon their good behaviour during the continuance of the war, are to have their freedom every after; for which...that their masters should have a consideration made them by the public...".
Most of page 2 is taken up with "Extracts from the Journals of Congress" at Philadelphia. Also a report: "...that Great Britain has asked of  France a cessation of arms; but our court returned for answer that she would not assent to it  without the concurrence of America..." followed by other war news.
Also a report: "...a party of near 200 of the enemy landed at Middletown in Monmouth county...But from the alertness of our militia in collecting, and bravery in repelling those invaders, they were soon driven on board their boats...".
Additional war reports, some seen in the photos.
Four pages, never bound nor trimmed, wide margins, loss of a piece at the bottom of the front leaf does not affect text in any mentioned reports, otherwise good.

Two Acts of Congress signed by John A...