Home > Back to Search Results > Battles in the South... Praise for John Paul Jones...
Click image to enlarge 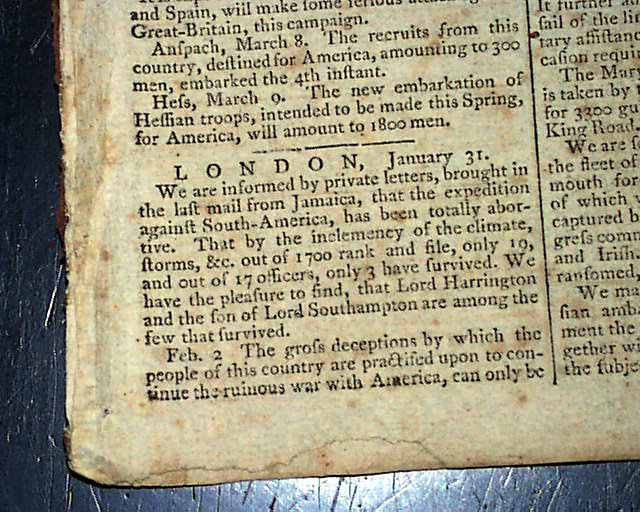 Battles in the South... Praise for John Paul Jones...

The front page has an interesting  report from London on the lack of reinforcements coming from England to help with the situation in New York: "The gross deceptions by which the people of this county are practiced upon to continue the ruinous war with America can only be equaled by the shameful manner in which our brave troops at New York are deceived into the expectation & belief of strong reinforcements to assist them to carry on the war..." followed by a report of the ships planned to sail to New York. And then: "What must these brave, neglected men think when they find that the whole of this flattering tale is, from beginning to end, a notorious deception?" More as well.
Page 2 begins with a report noting; "The tobacco in & near Richmond is all destroyed by the British army..." with more on military actions. Then a letter signed in type by: La Fayette which details the Battle of Spencer's Ordinary, part of the successful campaign of the American & allied forces against the British forces in the South. Then a bit noting: "...Notwithstanding no official account of the surrender of the important post of Augusta, in Georgia...that gallant & enterprising officer, Lieut. Col. Lee...has reduced Col. Brown, who commanded it, to surrender at discretion...Lord  Rawdon immediately marched those into the country for the relief of Ninety-Six..." and much more.
Also a nice item from Congress: "Resolved, that Congress entertain a high sense of the distinguished bravery & military conduct of JOHN PAUL JONES Esq., Captain in the navy of the United States, and particularly in his victory over the British ship of war Serapis on the coast of England...", and then another item concerning praise for John Paul Jones.
Four pages, ornate lettering in the masthead, small hole in the back leaf does not affect any mentioned items, very nice condition.