Home > Back to Search Results > The Revolutionary War in the South...
Click image to enlarge 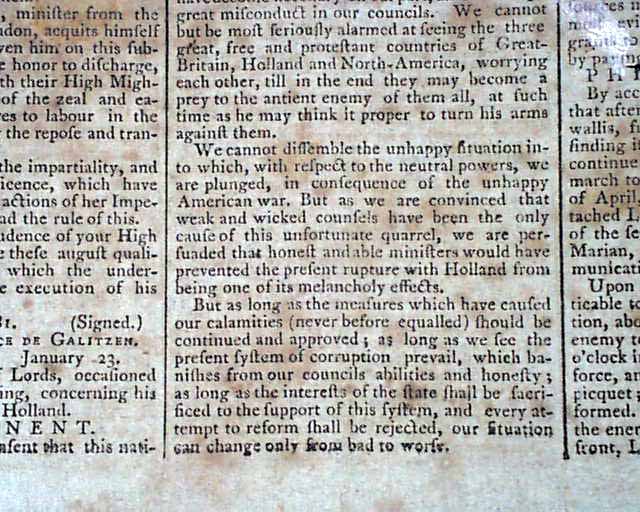 The Revolutionary War in the South...

Page 2 has a few items concerning the war, including an item: "...after the precipitate  retreat of Lord Cornwallis from Deep River, General Greene not finding it convenient for want of provisions to continue the pursuit, filed off & directed his march to Camden...to join Gen. Marian [Marion] and to invest the enemy's post of  communication upon the Santee. Upon his arrival at Camden, finding it impracticable to storm the town, he took such a position...as might induce the enemy to sally...", with more.
Interesting items carry over to page 2, including a report from Boston that: "...His Excellency JOHN HANCOCK, Esq. was declared Governor & Commander in Chief of this Commonwealth...". Also mention that: "...a hand-bill was published in Charlestown giving a short account of the action on the 15thd of that month at Guilford Court House between Gen. Greene and Lord Cornwallis in which the enemy claim the victory, but acknowledge the loss of Lieut. Col. Stuart and Capt. Goodrich..." and more. This was the historic Battle of Guilford Court House which caused Cornwallis to give up his attempt to establish British control over the Carolinas.
The back page has a half column letter signed in type by: John Adams, as ambassador to the Netherlands.
Four pages, small hold to the front leaf, some wax stains to the front page, various foxing.