Home > Back to Search Results > 1940 "Gone With the Wind" academy awards...
Click image to enlarge 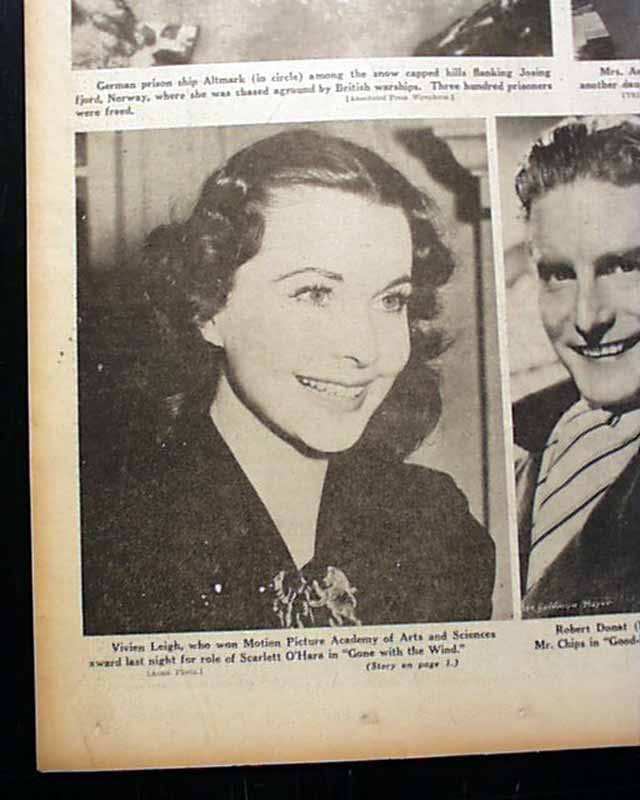 The front page has a one column heading: "Film Prizes Go to Robt. Donat and Miss Leigh" (see) Photo of Vivien Leigh is on the back page. Always nice to have notable events in history reported in this World famous publication.
Complete with all 40 pages, light toning at the margins, small library stamp within the masthead, small binding holes along the spine, generally nice.

wikipedia notes: Gone with the Wind is a 1939 American film, a historical epic and romance-drama adapted from Margaret Mitchell's Pulitzer-winning 1936 novel of the same name. It was produced by David O. Selznick and directed by Victor Fleming from a screenplay by Sidney Howard. Set in the 19th century American South, the film stars Clark Gable, Vivien Leigh, Leslie Howard, Olivia de Havilland, and Hattie McDaniel, among others, and tells a story of the American Civil War and Reconstruction era from a Southern point of view.

The film received 10 Academy Awards (8 competitive, 2 honorary), a record that stood for 20 years. In the American Film Institute's inaugural Top 100 Best American Films of All Time list of 1998, it was ranked fourth. "Gone With the Wind" is considered one of the greatest and most popular films of all time and an enduring symbol of the golden age of Hollywood. The film was the longest American sound film made up to that time – 3 hours 44 minutes, plus a 15 minute intermission.