Home > Back to Search Results > Articles of Confederation are now in force... Wealth of fine content...
Click image to enlarge 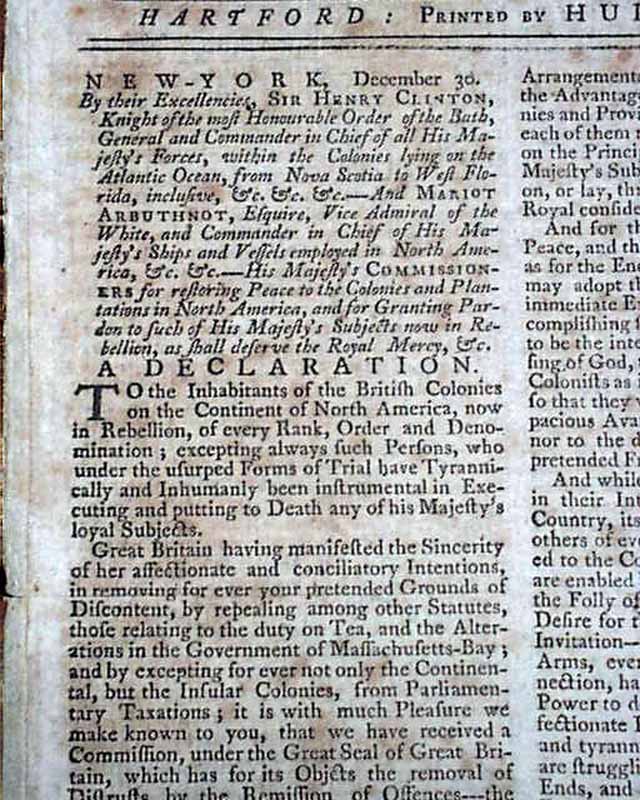 Articles of Confederation are now in force... Wealth of fine content...

* Articles of Confederation are now in force
* American Revolutionary War

A very historic issue, as page 3 reports that Maryland has ratified the Articles of Confederation. The Articles of Confederation was the first constitution of the United States of America and legally established the union of the states.
Maryland Governor Thomas Sim Lee signed the Act on Feb. 2, 1781 whereby the Maryland Legislature ratified the Articles of Confederation and Perpetual Union. As Maryland was the 13th and final state to ratify the Articles, the act established the required unanimous consent for the formation of the United States of America.
The report reads: "In pursuance of an Act of the Legislature of Maryland, entitled, 'An Act to empower the Delegates of this State in Congress to subscribe & Ratify the Articles of Confederation', the Delegates of the said state on Thursday last, at twelve o'clock signed and ratified the Articles of Confederation, by which act the Confederation of The United States of America was compleated, each and every one of the Thirteen States from New  Hampshire to Georgia, both included, having adopted and confirmed, and by their delegates in Congress ratified the same."
A bit further on is: "Thus will the first of March, 1781, be a day memorable in the annals of America for the final ratification of the Confederation and perpetual Union of the Thirteen States of America---A Union, begun by necessity, cemented by oppression and common danger, and now finally consolidated into a perpetual Confederacy of these new and rising States: And this the United States of America, having, amidst the calamities of a destructive war, established a solid foundation of greatness, are growing up into consequence among the nations, while their haughty enemy, Britain, with all her boasted wealth and grandeur..." with more, including: "This happy event was immediately announced to the public by the discharge of the artillery on land, and the cannon of the shipping in the river Delaware."
There is also a note: "The evening was closed by an elegant exhibition of fireworks. The Ariel frigate, commanded by the gallant John Paul Jones, fired a feu de jove & was beautifully decorated with a variety of streamers...".
Most of the front page is taken up with: "A DECLARATION" issued by Sir Henry Clinton, which was: "...for restoring Peace teo the Colonies and Plantations in North America, and for Granting pardon to such of His Majesty's Subjects Now in Rebellion as Shall Deserve the Royal Mercy".
Following this is a terrific response: "To Sir Henry Clinton...", which includes in part: "It is the weakness of human grandeur never to be made sensible of its own follies...more than five years since you & your predecessors in command have by fallacy endeavoured to accomplish that which they & you despaired of effecting by force...than to convince the world of your own arrogance...Self-preservation, sirs, is a principle implanted in human nature; as no one wishes to have his property destroyed & his life wantonly taken from him...America will not come under any power on earth: She is at peace with all the world, Great Britain excepted..." and more hateful rhetoric against the "Declaration", ending with: "...We marvel you are not tired of having recourse to deception. You have lately suffered severely for it. Andrew is justly taken from you in return for whom you possess one of the most consummate traitors on earth...Trouble us no more with impertinence, but if you wish for an object so desirable as peace, let AMERICAN INDEPENDENCE from under your master's hand be amply displayed in the front of your declaration...".
There is a great wealth of fine war reporting taking up page 2, too much to mention here but visible in the photos. Included is much concerning the efforts of General Greene in the South with reference to the capture of Tarleton at Cowpens, plus other efforts prior to the Battle of Guilford Court House, etc.
Simply a terrific issue with a great wealth of notable content.
Four pages, decorative lettering in the masthead, scattered foxing, a bit irregular at the bottom of the back leaf, nice condition.