Home > Back to Search Results > Much on events in the South: General Greene & others...
Click image to enlarge 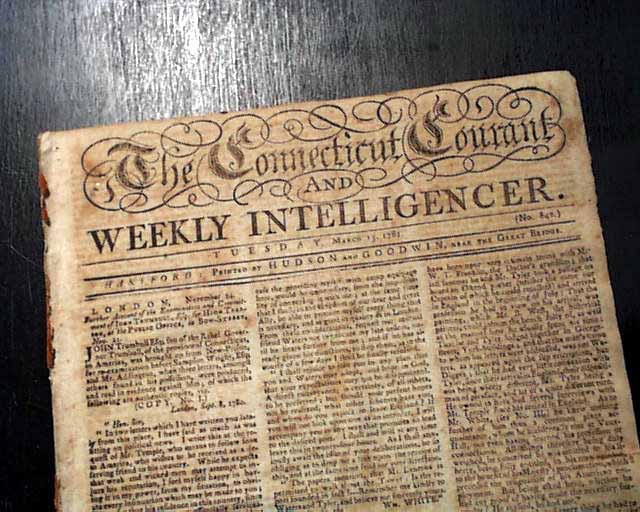 Much on events in the South: General Greene & others...

Most of the front page is taken up with reports concerning the: "Account of the Examination& Commitment of John Trumbull, for High Treason", some of the "rebel governor" of Connecticut who was accused of being a spy and who spent 7 months in a London prison.
Page 2 has a great wealth of content on the Revolutionary War with: "Intelligence From the Southward" with much on the work of General Greene around the events of the Battle of Cowpens and the defeat of Col. Tarleton. Included also is a fine letter signed by: Henry Lee, beginning: "I have the honor to advise you of the compleat surprise of the post at George-Town this morning by the infantry of the legion..." with good detail.
There is further reference to the Battle of Cowpens: "...that the brave & conquering troops under Gen. Morgan had acquired by their late victory on the 17th of January...as the column under Tarleton were destined to penetrate into North Carolina...Our enemies have seen with no little chagrin, the squadron of France taking possession of & maintaining the important posts of Rhode Island..." with more fine content.
Page 3 has a nice item headed: "Recruiting Instructions".
Four pages, decorative lettering in the masthead, scattered foxing, very nice condition.