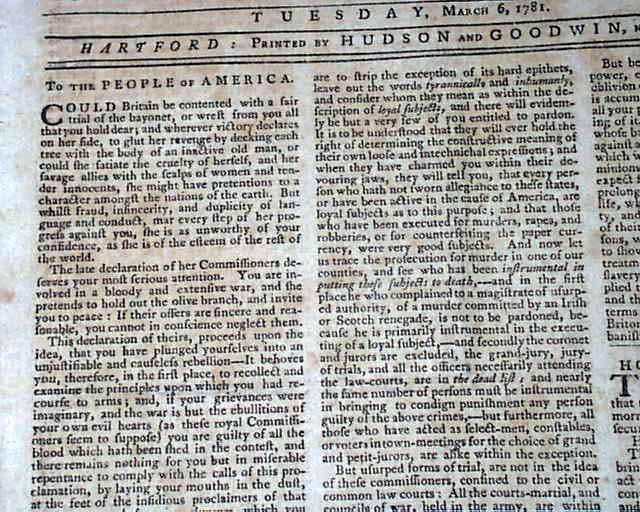 Most of the front page is taken up with an impassioned plea: "To The People of America". The focus is on the recent conciliatory declaration by England towards a peace, but this write warns to not be deceived. A few bits including: "...the late declaration of her Commissioners deserves your most serious attention. You are involved in a bloody & extensive war and she pretends to hold out the olive branch & invite you to peace...This declaration of theirs proceeds upon the idea that you have plunged yourselves into an unjustifiable & causeless rebellion...But be not deceived---Was Britain, as a power, ever so much disposed to cast an eternal oblivion over the controversy?..." and much more.
Page 2 has a report which includes: "...Every advantage over an enemy is, no doubt, of considerable consequence; but partial victories operate but slowly against a firm & united people...now see clearly that what we had so often heard about murmurs & discontents in the rebel army was not so ill founded...though the late attempt in so large a body of the to shake off the tyranny of Congress...Though every one must lament the fate of Major Andre, it was certainly right in Sir Henry Clinton not to give up Mr. Arnold as he could not have complied with Washington's proposal on that head without a breach of faith...The circumstance of General Arnold's apostasy & the melancholy death of Major Andre has driven from our minds a matter of more important tendency...".
Further on: "General Arnold's letter to Lord G. Germaine...says that Congress would not be able to stand their ground half an hour if his Lordship would publicly...declare to America the terms that would be given to all the colonies...The return of General Arnold to his allegiance has closed the mouths of many a coffee-house orator. He was held out as a terror to Great Britain...American in hi have lost her strongest martial pillar. Gates is as imprudent as Burgoyne & Washington can only act in avoiding to fight..." and so much more.
More fine content evident in the photos.
Four pages, decorative lettering in the masthead, a bit rounded at a lower corner, generally very nice condition.