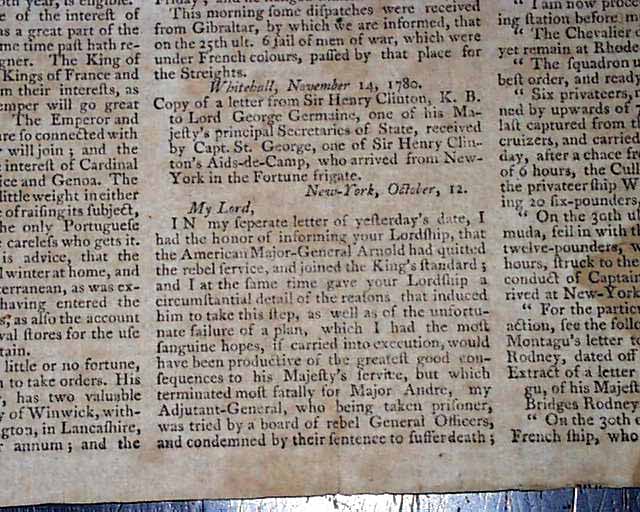 The front page features a letter from Sir Henry Clinton to Lord George Germaine from New York, noting in part: "...the honor of informing your Lordship that the American Major-General Arnold had quitted the rebel service and joined the King's standard...a circumstantial detail of the reasons that induced him to take this step, as well as of the unfortunate failure of a plan, which I had the most sanguine hopes if carried into execution, would have been productive of the greatest good consequences to his Majesty's service but which terminated most fatally for Major Andre...who being taken prisoner, was tried by a board of rebel General Officers & condemned by their sentence to suffer death, which sentence was ordered by the rebel General Washington to be carried into execution upon this unhappy gentleman on the 2nd inst. I sincerely lament the melancholy fate of this officer...", signed in type: H. Clinton.
Most of a page 2 column is taken up with a plan for a peace noting the seven Articles which are proposed. Also inside are reports from Richmond and Fredericksburg on the latest military events, then a report from West Chester, New York. Also: "From the best authority we learn that the state of Maryland hath agreed to the confederation of the United States, by which means the confederacy is now complete. We also learn that the state of Virginia have given up their claim to the back lands and have...ceded to the United States all the lands lying to the westward of the River Ohio."
Page 3 begins with a: "List of the Names of the Officers in the Five Regiments of Infantry, Connecticut Line, 1781...".
Four pages, decorative lettering in the masthead, a rounded lower corner affects about 4 words in an unrelated pg. 2 article, bit of foxing, an archival repair to page 3.