Home > Back to Search Results > Letter from Benedict Arnold... Mutiny among the New Jersey troops...
Click image to enlarge 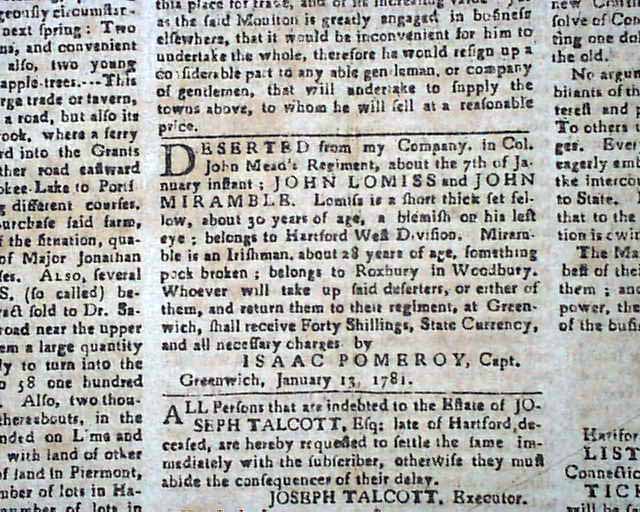 Letter from Benedict Arnold... Mutiny among the New Jersey troops...


THE CONNECTICUT COURANT & WEEKLY INTELLIGENCER, Hartford, Feb. 13, 1781  Page 2 begins with a letter from Richmond signed in type by: Benedict Arnold, concerning relations with the local people of Richmond noting that: "...I have not the least  intention to injure the peaceable inhabitants in their persons or property; but that every thing supplied the troops by them shall be punctually paid for."
Almost all of the balance of page 2 is taken up with some fine content on the Revolutionary War including talk of General Morgan's work in the South from just prior to his great victory at Cowpens; plus a letter from Petersburg, Virginia beginning: "We have for some weeks past expected our town to be reduced to ashes. The enemy have been within 12 miles of it...Arnold obliged the inhabitants of Richmond to turn out all their rum, sugar, etc. into the street & then destroyed the whole...".
Then a letter from Fredericksburg with more fine content (see photos. There are also reports on war events in New Jersey.
Then a letter from an officer at Horse-Neck beginning: "We are now returned from a successful expedition against the enemy at Morrissania..." with much detail.
Page 3 has a notable "Extract From General Orders" from Washington concerning thanks for the efforts in: "...suppressing the late mutiny in a part of the Jersey line..." with much more.
Four pages, decorative lettering in the masthead, a rounded lower corner causes loss to a few words on pgs. 2 & 3, generally nice condition.