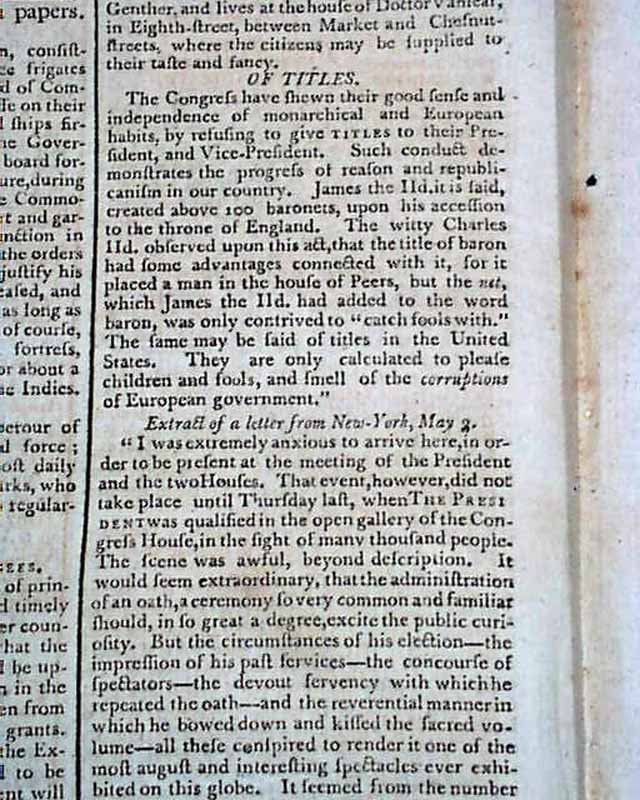 
THE MASSACHUSETTS CENTINEL, Boston, May 23, 1789  The ftpg. has an article on slavery, as well as continuing reporting on the events in Congress. Page 2 has some reports mentioning the President but certainly the best item is a great eye-witness to the inauguration of George Washington, rarely found in period newspapers. See the photos for the full text of this terrific letter, which gives a great sense of the religious overtones & fervor of patriotism as the writer witnessed this exceedingly historic moment in the creation of the new federal government.
Portions include: "I was extremely anxious to arrive here in order to be present at the meeting of the President & the two Houses. That event, however, did not take place until Thursday last when The President was qualified in the open gallery of the Congress House, in the sight of many thousand people. The scene was awful, beyond description...in so great a degree, excite the public curiosity...the devout fervency with which he repeated the oath--and the reverential manner in which he bowed down & kissed the sacred volume--all these conspired to render it one of the most august and interesting spectacle ever exhibited on this globe. It seemed from the number of witnesses, to be a solemn appeal to Heaven and earth at once...that the gracious Ruler of the universe was looking down at that moment with peculiar complacency on an act...Under this impression, when the Chancellor pronounced, in a very feeling manner, 'Long live GEORGE WASHINGTON', my sensibility was wound up to such a pitch, that I could do no more than wave my hat with the rest, without the power of joining in the repeated acclamations which rent the air.' "  Very rare to find such eye-witness accounts of Washington's first inauguration in a period newspaper.
Page 3 has a list of how the Senators would stagger their terms during the formative years of our federal government, one-third serving 2 years, one-third four years, and one-third six years, with names listed (see). Page 3 also has interesting discussion on how to address the President, including: "...their unanimous opinion that it will be proper to address the President "His Highness, the President of the United States of America, and Protector of Their Liberties...".
Four pages, very nice condition.