Home > Back to Search Results > Much frutration that a quorum for the new Congress has not yet been achieved...
Click image to enlarge 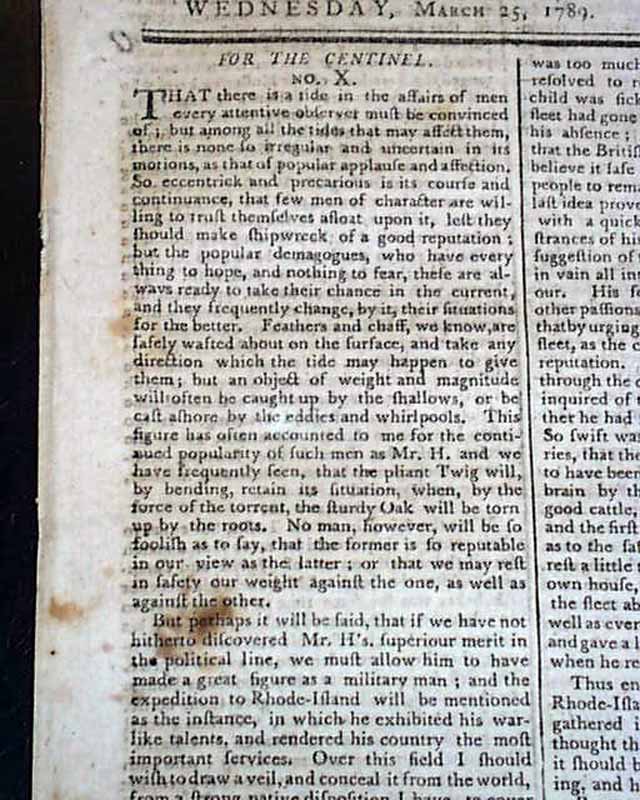 Much frutration that a quorum for the new Congress has not yet been achieved...


THE MASSACHUSETTS CENTINEL, Boston, March 25, 1789  Most of the ftpg. is taken up with a lengthy political essay signed: "Laco", thought to have been Sam Adams.
Page 3 news from New York reflects the frustration of all of getting a quorum to begin the work of the new Congress: "To our great mortification...by dampening that favourable impression which had been made on the minds of our constituents relative to that decision which was expected from our new government, we have not yet been able to form a quorum of either House, and from appearances it will not probably be effected until the beginning of next week. I send you enclosed a list of the members in town..." followed by a list of senators and Representatives.
Another  report has: "Strange as it may appear, there is not yet a quorum of the new Congress--the badness of the  roads is assigned as the chief cause...there are but eight Senators and the numb of Representatives 21..." with much more on this.
Four pages, good condition.