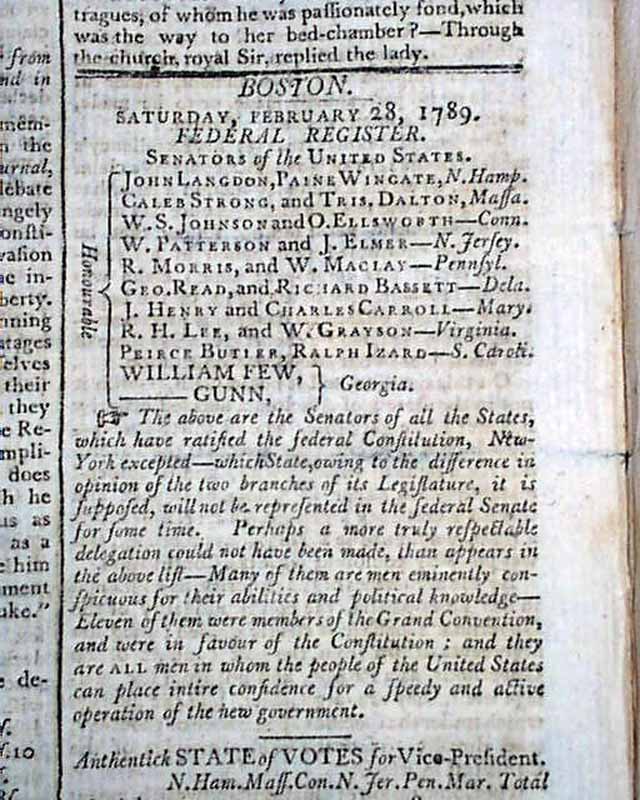 Page 2 has an article beginning: "By information received from Kentucky we learn that many of the principal people of  that district are warmly in favour of a separation from the union L& contend that it is injurious to the interests of that country to be connected with the Atlantick States..." with more.
The "Federal Register" lists the Senators elected to the new federal Congress from ten of the states. Most notably this is followed by a report headed: "Authentick State of Votes for Vice-President, by state. And then even more notably: "A letter from a respectable gentleman at Philadelphia informs us that it is ascertained to be a certainty that Gen. WASHINGTON is elected President--and the Hon. JOHN ADAMS, Vice President of the United States..." with more on this.
Page 3 has a report beginning: "The anniversary birth-day of President WASHINGTON was celebrated in Philadelphia by the ringing of bells, discharging of cannon..." and more.
Page 3 has two brief reports: "The Hon. Mr. Madison of Virginia, in a letter to a gentleman in that state, has expressed himself decidedly in favour of amendments to the Constitution. Mr. Maddison is, we hear, elected a Representative for Virginia." And also: "Lately died in Vermont, the celebrated and truly eccentrick Col. ETHAN ALLEN."
Four pages, somewhat irregular at the bottom margin with loss to a few words, archival repair at the bottom of the spine, otherwise good.