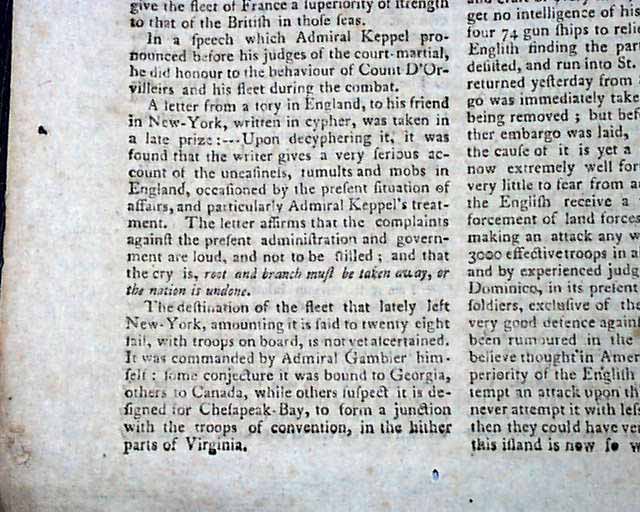 A truly rare title from the Revolutionary War, as it lasted for less than 1 1/2 years from March, 1779 to August, 1781. This issue is volume 1, number 11.
The front page reports on a letter "...from a tory in England to his friend in New York, written in cypher...Upon deciphering it, it was found that the writer gives a very serious account of the uneasiness, tumults and mobs in England...destination of the fleet that lately left New York...some conjecture was bound to Georgia, others to Canada, while others suspect it is designed for Chesapeake Bay to form a junction with the troops of convention in the hither parts of Virginia." Also that: "...confirmation that the army of General Washington has been some time in motion...".
Nice content on inside pages as well with a report from Charleston on a skirmish with the Creek and Cherokee Indians, with additional details taking an entire column. Also mention: "The British force in Georgia, having advanced higher up the country, has occasioned Gen. Lincoln with the main body of our army to make a movement."
Then another report from Williamsburg notes: "...from the southward brings the agreeable account of General Lincoln's advantage over a part of the enemy's army...", then a report from Fort Augusta concerning military events with Indians.
More concerning General Lincoln and General Moultrie's army in the Charleston vicinity.
Under the datelines of Providence are various war-related reports, and then two "deserted" advertisements, with much detail.
The back page has a report from Trenton beginning: "On the 26th ult. the enemy in two divisions landed in the county of Monmouth...and then proceeded to Trenton falls..." with more on the military movements in that vicinity (see).
Four pages, never-trimmed margins, great condition.