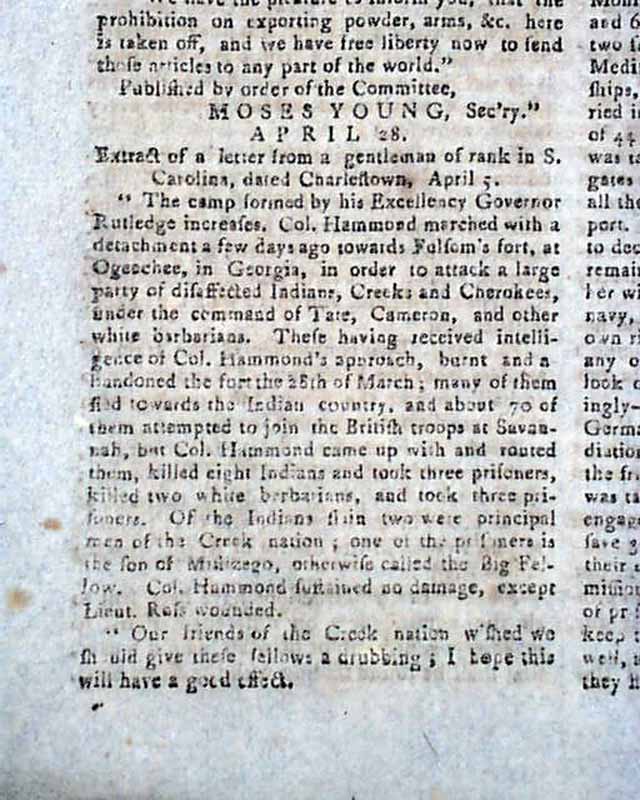 
THE AMERICAN JOURNAL & GENERAL ADVERTISER, Providence, Rhode Island, May 13, 1779  A truly rare title from the Revolutionary War, as it lasted for less than 1 1/2 years from March, 1779 to August, 1781. This issue is volume 1, number 9.
The entire front page is taken up with: "Admiral Keppel's Trial" due to a dispute on the actions of his second in command. A report of his acquittal is on page 2.
Page 2 has a report from Charleston which includes: "...Col. Hammond marched...a few days ago towards Fulsom's Fort at Ogeechee in Georgia in order to attack a large party of disaffected Indians, Creeks & Cherokees..." with more on this. Also a detailed account of a naval encounter (see).
Other items include: "It is reported by the southern post...with accounts that General Lincoln had defeated the British troops in Georgia, killed 150 in the field & took 500 prisoners." Also a sarcastic piece about Loyalists. Then a report concerning continental troops on the Narragansett shore and the want of provision.
Page 3 has: "Letters from Connecticut...confirm the account that the enemy are moving from Long Island to New  York...that some noted tories there...are advertising their estates for sale..." and more.
Most of a back page column is taken up with latest news item including: "...France will insist upon the independence of America as an indispensable preliminary to all accommodation...America in my opinion stands upon high ground...".
Four pages, never-trimmed margins, great condition.